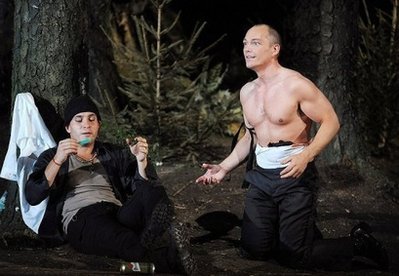 Mozart's three greatest and best-loved operas -- "Don Giovanni", "Cosi fan tutte" and "The Marriage of Figaro" -- will top the bill at next year's Salzburg Festival, the organizers announced Wednesday.

German director Claus Guth will rework his recent readings of Mozart's three so-called "Da Ponte" operas, which he wrote with librettist Lorenzo Da Ponte, for the 2011 edition of the ultra-swank annual summer extravaganza.

He will, however, completely re-work the stagings for next year's festival, even down to the sets, the festival's interim chief Markus Hinterhaeuser told a news conference.

And while Salzburg's in-house orchestra, the Vienna Philharmonic, had been in the pit for the previous outings of Guth's stagings, this time period-instrument bands, the Orchestra of the Age of Enlightenment and Les Musiciens du Louvre-Grenoble, will perform "Figaro" and "Cosi" to give a completely different sound.

In addition to the three Mozart works, opera lovers will also be able to feast their eyes and ears on a new production of Richard Strauss' "Die Frau ohne Schatten" by German director Christof Loy and conducted by German maestro Christian Thielemann.

Peter Stein will unveil his new reading of Verdi's "Macbeth" under the baton of Riccardo Muti and Leos Janacek's "The Makropulos Case" will be staged for the very first time in Salzburg, conducted by Finnish maestro Esa-Pekka Salonen and directed by Swiss theatre auteur Christoph Marthaler.

Two one-act operas, Stravinsky's "The Nightingale" and Tchaikovsky's "Iolanta", will be given in concert performances, with Salzburg's perennial darling Russian superstar soprano Anna Netrebko singing the title role in the second work.

Ticket prices are among the highest in the classical music world with the best seats costing as much as 370 euros (509 dollars) apiece.(AFP)