U.S. May Use Romanian Airbase for Afghan Pullout 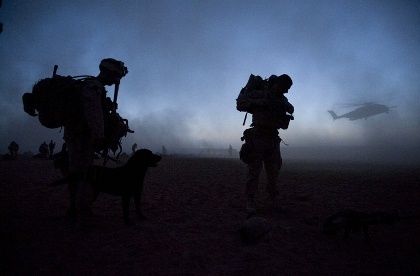 The United States is close to a deal with Romania that would see American troops return home from Afghanistan via an air base on the Black Sea, officials said Thursday.

The proposed agreement would solve a major logistical hurdle facing the U.S. as it pulls out the bulk of its combat forces and gear from Afghanistan over the next year.

Under the arrangement, troop flight operations would shift to Romania from Manas airbase in Kyrgyzstan, where a lease expires in July 2014, U.S. defense officials told Agence France Presse.

"The final details are being worked out," said one of the officials.

The logistics of the U.S. withdrawal are "phenomenally complicated," the official said. "And this was a key piece of the puzzle."

The possible agreement reflected "a growing relationship between the United States and Romania, which is in a strategically vital part of the world," he added.

Romania previously agreed to host a site for U.S. anti-missile interceptors as part of a NATO ballistic missile defense system.

Representatives from both governments in recent months have been negotiating the terms for use of the Mihail Kogalniceanu air base in eastern Romania, which would serve as the main hub for flying troops out of Afghanistan back to the United States.

Some equipment also would be flown from Afghanistan to the base, officials said.

The Manas air field in Kyrgyzstan has been a recurring headache for Washington with tense negotiations over rental fees.

In 2010, political unrest in the Central Asian country led the U.S. military to temporarily limit flights at Manas.

The United States has about 51,000 troops in Afghanistan and the bulk of the force will be pulled out -- along with huge quantities of vehicles and weapons -- by the end of 2014.

America, however, hopes to keep a smaller force of 8,000 to 12,000 troops in Afghanistan after the main pullout but has yet to clinch an agreement with the Kabul government.

Withdrawing soldiers and equipment out of land-locked Afghanistan is a daunting logistical challenge, and the Pentagon plans to rely mainly on land routes through Pakistan to move out most of the vehicles and gear.

Troops as well as weapons, ammunition and other sensitive items will be flown out by cargo plane.