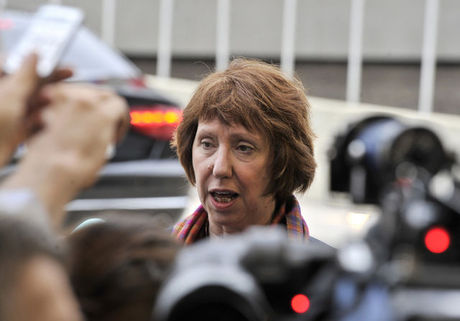 The European Union urged voters across Kosovo on Thursday, including Kosovo Serbs, to participate in key weekend local elections as it announced extra funding to cushion a Serbia-Kosovo peace deal.

"The November 3 elections are a key moment in Kosovo's future and are an important element in the implementation of the April Agreement and the process of normalization of relations between Kosovo and Serbia," EU foreign policy chief Catherine Ashton said in a statement.

Urging the premiers of Kosovo and Serbia to show the "same vision and courage" in ensuring a fair vote as they had in reaching the historic April deal, Ashton said "the EU will be following closely the conduct of the elections."

"My message to the people throughout Kosovo is: participate in the elections on Sunday. This is especially true for the Kosovo Serb community. I understand the concerns, particularly in the north, but participation is the best way to ensure that your voice is heard."

Kosovo's minority Serbs, who reject Kosovo's unilateral breakaway from Serbia in 2008, are torn over whether to vote in the elections backed by former Yugoslav master Serbia for the first time as part of the April deal.

Serbia still officially rejects Kosovo's independence, but agreed to encourage the breakaway province's Serb community to vote under pressure from the EU, which it hopes to join.

Some 40,000 Serbs live in the northern Kosovo region bordering Serbia, which has maintained a certain control of institutions there, giving Pristina almost no power in the area. Another 80,000 Serbs live scattered in enclaves throughout Kosovo.

Also Thursday, the EU executive, the European Commission, announced 15 million euros in additional funding to support the deal to normalize ties between the two.

The funds will address the needs of Serb majority municipalities throughout Kosovo, with a specific emphasis on the north, the Commission said, focusing on infrastructure, public administration, rural development, employment and environmental protection needs.

They are in addition to an annual 65 to 70 million euros already allocated to Kosovo.