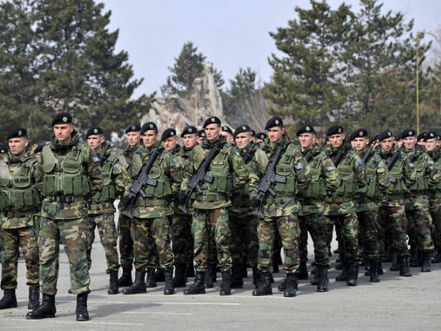 Serbia's war crimes prosecutor on Wednesday charged two army officers with the murder of at least 27 Kosovan civilians including a young child during the 1998-1999 war.

Pavle Gavrilovic and Rajko Kozlina are charged with committing a war crime against civilians in March 1999 in the southern Kosovo village of Trnje, the prosecutor said in a statement.

The attack was ordered by Gavrilovic, 48, who told his unit "not to leave anyone alive" in the village, the indictment said.

Kozlina, 37, and other soldiers who have not been identified entered the village and killed at least 27 civilians, including a four-year old child, it said.

At the time the two men were members of the Yugoslav army, but they have since served in the Serbian army, the prosecutor's office said.

It is up to the investigating judge to decide whether to order their arrest.

The war, which claimed around 13,000 lives, ended when a NATO-led air campaign halted late strongman Slobodan Milosevic's crackdown on the pro-independence Kosovo Albanians and ousted his forces from the territory in June 1999.

Kosovo declared independence from Serbia in February 2008. It has been recognized by some 100 countries, including the United States and 23 of 28 European Union members.

But Serbia, backed by its ally Russia, still refuses to recognize Kosovo's independence, considering it as a cradle of its nation.

The Hague-based U.N. war crimes tribunal is tasked with handling senior war crimes cases from the 1990s wars in the former Yugoslavia, while local justice deal with lower-ranked suspects.