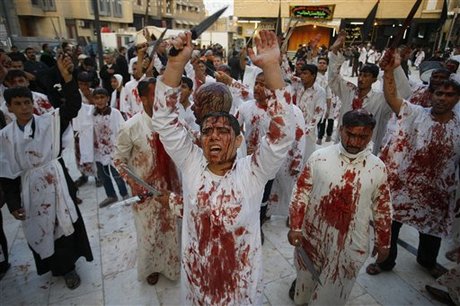 Attacks mostly against Shiites, including a suicide bombing that ripped through a religious procession, killed 43 people in Iraq Thursday despite massive security deployed for one of the holiest days of their faith.

The bloodshed came as a flood of worshipers, including tens of thousands of foreign pilgrims, thronged the central shrine city of Karbala for the climax of Ashura, braving the repeated attacks by Sunni militants that have marred the festival in previous years.

The suicide bomber, who was disguised in a police uniform, struck in a Shiite-majority area of confessionally mixed Diyala province, north of Baghdad, killing 32 people and wounding 80, security and medical officials said.

It was the third attack of the day to target Shiites.

Earlier, coordinated blasts in the town of Hafriyah, south of the capital, killed nine people, while twin bombings in the northern oil city of Kirkuk wounded five.

Shiites from Iraq and around the world mark Ashura, which this year climaxed on Thursday, by setting up procession tents where pilgrims gather and food is distributed to passers-by.

An estimated two million faithful gathered in Karbala, site of the mausoleum of Imam Hussein, grandson of the Prophet Mohammed, whose death in the city at the hands of soldiers of the caliph Yazid in 680 AD lies at the heart of Islam's sectarian divide.

Tradition holds that the venerated imam was decapitated and his body mutilated.

To mark the occasion, modern-day Shiite devotees flood Hussein's mausoleum, demonstrating their ritual guilt and remorse for not defending him by beating their heads and chests and, in some cases, making incisions on their scalps with swords in ritual acts of self-flagellation.

Black-clad pilgrims packed the shrines of Hussein and his half-brother Abbas, listening over loudspeakers to the story of the battle in which Hussein was killed, as volunteers distributed food and water.

"I have been coming since I was young, every year, even during the time of the tyrant Saddam," said Abu Ali,a 35-year-old pilgrim visiting from the southern port city of Basra, referring to the rule of the now-executed Sunni Arab dictator who savagely repressed Iraq's Shiite majority community.

Saddam Hussein barred the vast majority of Ashura commemorations, and the associated Arbaeen rituals, until his overthrow in the U.S.-led invasion of 2003.

"I challenge anyone not to cry," the worshiper said, describing his emotions on taking part in Ashura ceremonies.

The commemorations, which also included a ritual run to Hussein's mausoleum and a reenactment of the attack that killed him, wrapped up in the early afternoon.

Provincial authorities expect two million pilgrims, including 200,000 from outside Iraq, will have visited Karbala in the 10 days leading up to Ashura, with all of the city's hotels fully booked.

Shiites make up about 15 percent of Muslims worldwide. They are a majority in Iraq, Iran and Bahrain, and there are large Shiite communities in Afghanistan, Lebanon, Oman, Pakistan, Saudi Arabia, Syria and Yemen.

Sunni militants linked to Al-Qaida, who regard Shiites as apostates, often step up their targeting of Iraq's majority community during Ashura and Arbaeen, including by attacking pilgrims.

Security measures have been stepped up, with more than 35,000 soldiers and policemen deployed to Karbala and surrounding areas.

The violence against Shiites is the latest in Iraq's deadliest unrest since 2008.

It has prompted Prime Minister Nouri al-Maliki, himself a Shiite, to appeal to the United States for help in the form of intelligence sharing and the delivery of new weapons systems.

I am shocked and filled with emotions this morning. After watching Sayyed Al Moqawameh live from ground zero, Alona and I returned home to a goodnight blissful sleep. This morning a terrible accident occurred in our household. Holding a kitchen knife in one hand while practicing waving of her finger at the mirror as part of her daily rituals, Alona managed to cut off her finger and had to be rushed to hospital. At her bedside in Rasool Al Azam Hospital, she confided in me something that brought tears into my eyes. She finally decided to become a Zeinabiyeh and wants to perform her Jihadist duty in Syria. She also called off our planned wedding this coming Spring unless some conditions were met. A handful of terrifying thoughts crossed my mind as to what these conditions might be. I started to doubt myself: Did I fail to make the love of my life happy? Where did I go wrong? After all, I dedicated my whole life to her and it was unimaginable to think of life without her.

Terrified of losing her, I asked her what these conditions might be while reassuring her that I would do anything in my power to keep her. Holding my hand in her hand (the hand missing one finger), Alona uttered her conditions as follows:

① She wants to be known as AZ, short for Alona Zeineb Roaring-Flamethrower;
② I must accept the 9-9-6 government formula and never complain about it;
③ I must grow an unshaven beard and never eve wear a tie;
④ I must only shower on 3 occasions: the anniversary of the Islamic Revolution in Iran, the birthday of Sayyed Hassan, and the last day of Ashura;
⑤ No more dentist visits for routine hygiene and clean up;
⑥ Only 100% Nylon pyjamas and clothing are allowed in our household;
⑦ We must move from Ghazeer and live in Dahiyeh;

I am at a loss, confused, and tormented. I think I could comply with all her demands, but I am allergic to Nylon.

I am truly ROTFL! hahaha

back to middle ages! LOL!

What a sick and violent ritual, indeed.

Lovely picture. Can I help?

I am think it was RFT (forgive me if I'm mistaken) who wrote few days ago something approximately like this «nasrallah ma tihtam, 3andak zelem b'tichrab dam»! That was a killer.

Lets all jump off the roof since some idiots do it for reason God knows why. Yes, I can and will criticize and won't stop short of the Islams.

A culture less evolved but more violent then your garden variety jungle animals. Can Mother Earth sustain such cancer?