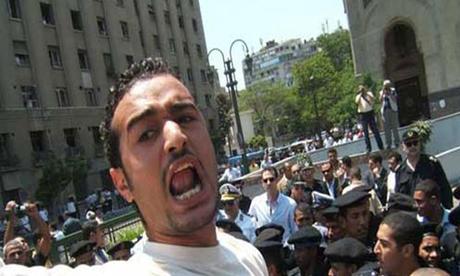 Duma is the third pro-democracy activist to be detained within a week, as Egyptian authorities widen their crackdown on protesters since interim president Adly Mansour passed a law on November 24 that bans all unauthorized demonstrations.

"He has been arrested for participating in a violent protest outside a court. He is now being interrogated by the prosecution," his wife Nurhan Hefzy told Agence France Presse earlier.

"I am now in Basateen police station. I don't know what I am accused of and what is the reason for my arrest," he tweeted Tuesday morning.

Judicial sources said Duma was being detained for four days for "using force and violence against security forces of Abideen court (in Cairo) and assaulting them".

The incident took place as Duma accompanied Ahmed Maher, another prominent activist, who was turning himself in at the court on Saturday.

Maher turned himself in after he was ordered arrested by the general prosecution.

Duma was also accused by the general prosecution of "organizing an unauthorized demonstration", the sources said.

Earlier Tuesday, a judicial source told AFP the prosecution is also investigating a separate complaint filed against Duma and another activist, Asma Mahfouz, for allegedly "insulting" army chief General Abdel Fattah al-Sisi, who is seen as the real power behind the nation's interim rulers.

In June, Duma was sentenced to six months in jail for describing now ousted Islamist president Mohammed Morsi during a television broadcast as "a criminal and murderer".

He was released on July 6, three days after the army ousted Morsi.

Duma is the third pro-democracy activist to be arrested within a week after Maher and Alaa Abdel Fattah, who is also being detained for having taken part in unauthorized protests.

The new protest law stipulates that permission to hold gatherings can be denied if a planned demonstration is deemed a threat to national security.

Secular activists and rights groups see these arrests as widening of a crackdown on protests by the government, which until now had been targeting Islamist supporters of Morsi.

The crackdown against Morsi's supporters has left more than 1,000 people killed in recent months and thousands more, mostly Islamists, arrested.