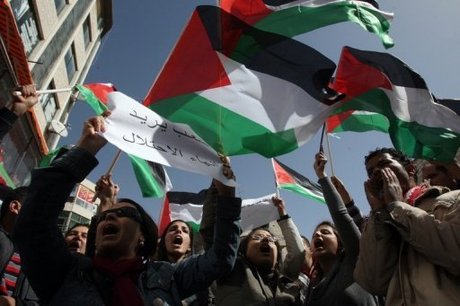 Israel is weighing the possibility of cancelling the landmark Oslo accords with the Palestinians in response to their plan to seek United Nations membership, the daily Haaretz said on Monday.

Citing unnamed Israeli officials, the newspaper reported that Yaakov Amidror, the head of Israel's National Security Council (NSC), was examining the potential cancellation as one of a number of responses to the U.N. bid.

Israel has fiercely opposed the Palestinian plan to seek U.N. membership for a state on the lines that existed before the 1967 Six Day War, including the West Bank, Gaza and east Jerusalem.

And Israeli Foreign Minister Avigdor Lieberman warned last month the 1993 Oslo Accords that created the Palestinian Authority, and all agreements since, would effectively be cancelled by U.N. recognition of a Palestinian state.

"The unilateral declaration at the United Nations would mean the end of the Oslo agreement and a violation of all the agreements that were signed up to today," he was widely quoted as saying by Israeli media.

"Israel would no longer be bound to the agreements that were signed with the Palestinians over the last 18 years."

Haaretz reported the potential cancellation of Oslo was only one of a number of "day after" actions that Amidror was considering, and said it was not currently considered a leading option.

Some members of Israel's Knesset have proposed Israel respond to the U.N. move by announcing an annexation of its West Bank settlements, but one Israeli source told Haaretz Netanyahu opposed such a measure.

"Therefore, the NSC is evaluating other possibilities, one of them being voiding the Oslo Accords. In any case, there is no decision yet," the source told Haaretz.