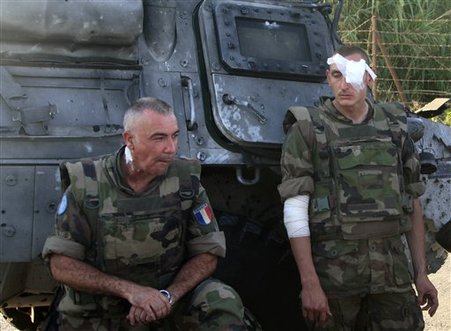 U.N. Secretary-General Ban Ki-moon and the Security Council strongly condemned the attack against a convoy of vehicles carrying members of the United Nations peacekeeping force near the southern city of Sidon in which five soldiers were wounded.

Ban “deeply disturbed” by the attack targeting the U.N. Interim Force in Lebanon (UNIFIL), according to a statement issued by his spokesperson Martin Nesirky.

The blast occurred outside UNIFIL’s area of operations, 55 kilometers north of the peacekeepers base at Naqoura.

“The Secretary-General hopes that the perpetrators are swiftly identified and brought to justice,” the spokesman added.

The Security Council also issued a statement condemning the attack.

“The members of the Security Council condemned all attempts to threaten the security and stability of Lebanon and reaffirmed their determination to ensure that no such acts of intimidation will prevent UNIFIL from implementing its mandate in accordance with Security Council resolution 1701.”

The Council welcomed Lebanon’s commitment to launch an investigation and to bring perpetrators of the attack to justice. It also recognized the cooperation between the Lebanese Armed Forces and UNIFIL.

Members of the Council urged all parties to abide “scrupulously” by their obligation to respect the safety of UNIFIL and other U.N. personnel and to ensure that their freedom of movement is fully respected.

On 27 May, a roadside bomb ripped through a UNIFIL convoy near Sidon injuring six Italian peacekeepers and two Lebanese civilians.

Spain currently commands UNIFIL, which was founded in 1978 and is tasked with overseeing a fragile peace along Lebanon's southern border with Israel.

Last August, the Security Council extended its mandate for a year, until 31 August 2011.