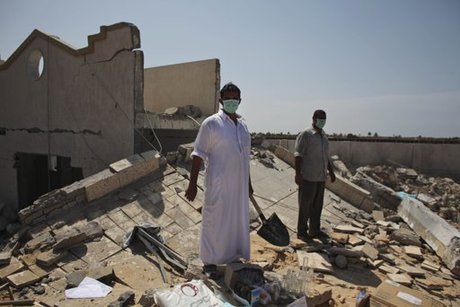 Parties to Libya's crisis remain deeply divided on how to end the conflict that has raged since an uprising against the regime erupted in February, U.N. special envoy Abdul Ilah al-Khatib said.

Khatib this week visited the rebel capital Benghazi in Libya's east as well as the capital Tripoli, where veteran strongman Moammar Gadhafi has his headquarters.

A U.N. statement issued in New York late Tuesday quoted Khatib as saying that both sides "remain far apart on reaching agreement on a political solution."

The warring parties, however, both reaffirmed to Khatib, U.N. Secretary General Ban Ki-moon's special envoy to Libya, "their desire to continue to engage with the U.N. in the search for a solution," the statement said.

In Tripoli, Khatib met with Libyan Prime Minister Baghdadi al-Mahmudi, who repeated previously held regime positions against NATO air strikes and against calls for Gadhafi to step down, it said.

"Mr. Khatib once again urged the authorities there to engage in a political process that leads to a political solution that meets the legitimate demands and aspirations of the Libyan people," according to the statement.

Gadhafi and rebel forces have fought their way into a stalemate, leaving the Libyan leader in control of much of the west and his Tripoli stronghold while the opposition holds the east from their bastion in Benghazi.