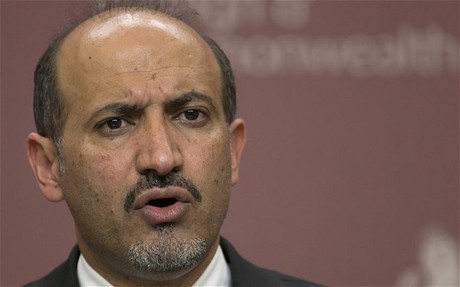 Syria's exiled opposition has postponed until next week a decision on whether to take part in U.N.-hosted peace talks in Switzerland, following two days of heated debate in Turkey, members said.

The general assembly of the mainstream opposition National Coalition decided to suspend its debate and meet again in Istanbul on January 17, just five days before the peace conference is to open in the the lakeside town of Montreux.

"The debates were very heated among the different groups that make up the coalition. It was not possible to take a decision," a source close to the opposition said.

The Syrian National Council, the main component of the coalition, had said Friday it would boycott the conference opening on January 22.

The SNC has long said it will not negotiate until President Bashar Assad's regime is toppled.

The Syrian opposition has "rightful hesitations" about the so-called Geneva II conference because of increasing attacks against civilians and the worsening humanitarian conditions, Turkish foreign ministry spokesman Levent Gumrukcu told reporters in Ankara on Wednesday.

Turkey wants the Syrian opposition to participate the conference in a "determined" fashion and to demonstrate a "clear vision" on Syria's future, he said.

At its last general assembly in November, the coalition said it was ready to take part in the peace conference as long as Assad and others "with blood on their hands" had no role in a political transition.

However the Syrian government insists that Assad's departure from power is not up for discussion.

The conference in Montreux is designed to find a political solution to end the civil war in Syria, which has claimed more than 130,000 lives and displaced millions of people since March 2011.