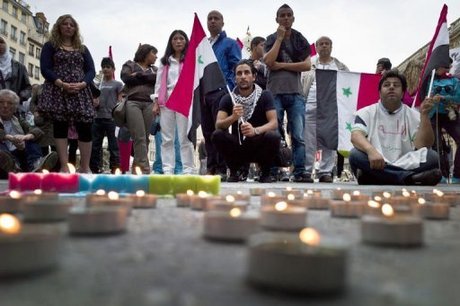 Syrian security forces shot dead at least 11 people in a swoop on the town of Kanaker near Damascus early Wednesday, a human rights activist said.

"The security forces raided homes at dawn on Wednesday and during the operation 11 people were shot dead and more than 250 arrested," head of the National Organization for Human Rights Ammar Qurabi told Agence France Presse.

The Syrian Observatory for Human Rights said residents of the southern Kanaker suburb tried to stop the advancing troops by throwing stones and closing roads with burning tires, the Associated Press reported.

The group said the raid also wounded a number of people who are being treated in mosques. It added that the raid occurred after electricity and telephones were cut off in the area.

President Bashar Assad's regime has unleashed a brutal crackdown on the four-month-old uprising. Activists say more than 1,600 people have been killed. The government blames the unrest on terrorists and foreign extremists.