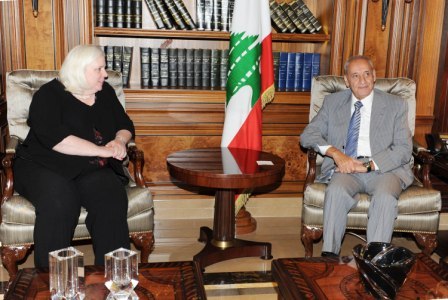 U.S. Ambassador Maura Connelly has reportedly asked Speaker Nabih Berri why Lebanon would not strike deals with companies to start oil exploration in its territorial waters as Israel did pending a solution to its conflict with the Jewish state on the Exclusive Economic Zone.

The ambassador stressed that the crisis should be solved through the U.N. But the speaker told her that the solution to the new Lebanese-Israeli maritime conflict comes through a series of talks between officers from Lebanon and Israel under the auspices of the U.N. to demarcate the maritime border.

When Berri asked Connelly about reports that U.S. envoy Frederic Hof was planning to visit Beirut to discuss about the conflict, Connelly said she had no information about such a trip.

But the media reports said Berri has told his visitors that he is ready to meet Hof if he visits Beirut. The diplomat allegedly has good knowledge of the issue as well as of mapping affairs.

What is wrong with Lebanon starting to drill and explore? Why do we need to solve the border issue first? Whatever gaz we get is more income for us and less for the zionist enemy. What is wrong with that? We are already a few years behind Israel with this now and we are still sleeping. How many years will it take to have a clear maritime border? Is it that Berri &Co haven't figured out a way to profit personally from it yet? Or could it be our friends are on the Israeli paycheque?

God bless Lebanon and US support to protect the Lebanese ntion from the long history of terrorism netwok organizations of the radical Islam in the region and the radical Zionist regime.
This is an ancient conflict between the people of one God over power, despite the fact that they are brothers of different mothers.

I don't think he understood the question actually!

Listen to what this fatso is saying! They can't even put pressure on the Israelis!!! DRILL IN TERRITORIAL WATERS, HUH!!! WHY DON'T THEY TELL THAT TO THE ISRAELIS? No wonder USA stands for United States of Bungholes.Sorry Friends-of-Israel-in-Lebanon for stirring your pot.

This is not a question of Lebanon to start negotiation with oil drilling companies.
The delay is caused by bickering of commission and personal benefit for Lebanon professional business men turned politicians.
This caused definitely a delay

Dakkouna alias Le phenicien alias Tanatanon has learned a new word: Bunghole. He's used it 25 times today. Now he can go back to your playstation and leave this website to the big-grownups.

Bas of course uk bassil is gnu take the credit for such an accomplishment, even though God blessed Lebanon with such a goldmine!

Yalaaa drill baby drill let that black gold spew to the heavens and relieve Lebanon from it's hindering debt you imbeciles!!