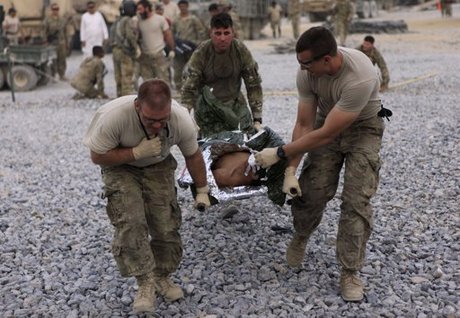 A minibus ran over a roadside bomb Friday in southern Afghanistan, killing all 18 passengers, police said.

"The mine was very powerful and destroyed the vehicle," said Kamaluddin Sherzai, deputy police chief in the southern Helmand province. "They were all civilians. Some were children."

Police who responded to the morning explosion in the province's Nahri Sarraj district came under fire from insurgents, but there were no casualties among the policemen.

Violence has been on the rise as the Taliban and other insurgents try to regain territory lost in the fall and winter to the U.S.-led coalition in southern Afghanistan.

Suicide attacks and other bombings have intensified as militants try to undermine confidence in the Afghan government's ability to provide security as U.S. and other coalition combat forces start to withdraw.

In its midyear report, the United Nations said the number of Afghan civilians killed in war-related violence rose 15 percent in the first half of this year.

The report said 1,462 Afghan civilians lost their lives, including 444 killed by roadside bombs. During the first half of last year, 1,271 Afghan civilians were killed in crossfire in the fighting between Taliban insurgents and Afghan, U.S. and NATO forces.

I still cannot understand what these savages achieve by killing poor innocent civilians?
Muslim extremists keep screaming that America and NATO are killing Muslims while they do the slaughtering themselves.
This violence is disgusting and unjustifiably committed by barbarians who do not belong to the human race.