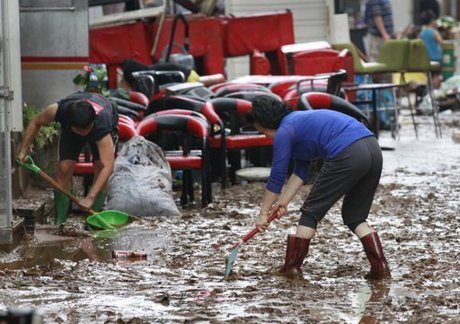 South Korean troops searched Friday for land mines that may have been dislodged by landslides and flooding that have killed dozens of people.

Torrential downfalls since Tuesday have severely disrupted life in Seoul and its surrounding areas, submerging streets filled with idled cars, flooding subway stations and forcing businesses to shut. At least 50 people have been killed.

Adding to the misery were fears that land mines may be buried in the debris of a landslide in the capital and that others may have been swept up in floodwaters flowing into the country across the mine-strewn border with North Korea. The military said it has sent some 140 soldiers armed with metal detectors to search for such ordnance.

Decades ago, South Korea planted land mines on Seoul's Wumyeon Mountain as part of efforts to thwart any possible land invasion by North Korean troops. Defense Ministry officials said most of them were removed between 1999 and 2006 but 10 haven't been accounted for.

A landslide there Wednesday killed at least 16 people.

North Korea's state media reported Thursday that heavy rains have hit much of the country and destroyed homes and buildings. Impoverished North Korea is susceptible to damage from heavy rains due to poor drainage and deforestation.

Last year, dozens of land mines apparently swept down from North Korea following heavy rains washed up in South Korea, killing one person and wounding another.

Also Friday, tens of thousands of South Korean firefighters, soldiers, police officers and other workers continued to clean up walls of mud and search for possible survivors in hard-hit areas, according to the National Emergency Management Agency.

The official death toll of 50 does not include 11 other people who died in accidents amid the rains that emergency officials say were caused by negligence. They cited a man who was drunk and went swimming in the floodwaters and drowned.