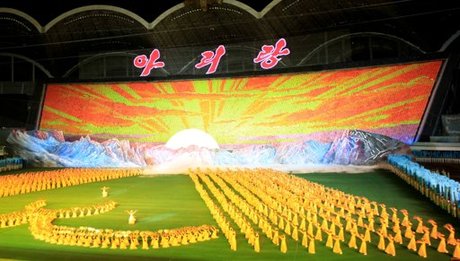 North Korea has launched a massive synchronized dance and gymnastics show meant to glorify its leaders and unify its people ahead of a crucial anniversary next year.

Organizers say up to 100,000 people will participate in the Arirang show. The performance comes as the North prepares for next year's centennial of the birth of North Korean founder Kim Il Sung.

Footage from Associated Press Television News in Pyongyang showed a large torch bursting into flames on the roof of a stadium Monday.

Children performed a gymnastics routine of cartwheels, flips and splits, and a huge fountain lit up in pink and blue shot water high into the night sky.

The first Arirang show was in 2002 and has been performed annually since 2007.