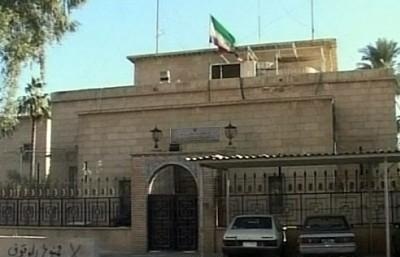 Gunfire erupted near the Iranian embassy in central Baghdad Tuesday, with contradictory reports over whether the mission had been targeted and even a claim that a guard had committed suicide.

An embassy employee who was in the area said the gunfire wounded a guard when it targeted the mission, near the heavily fortified Green Zone, where the Iraqi government is headquartered.

But spokesman Ali Naraqi said the shooting had nothing to do with the embassy.

And an interior ministry official said an Iraqi soldier guarding the embassy had shot himself to death at its entrance, emptying his weapon's magazine.

Predominantly Shiite Muslim Iran is widely reviled by Sunni militants, who accuse Iraq's Shiite-led government of being beholden to the country's eastern neighbor.

Iraq has been hit by a year-long surge in violence that has reached levels not seen since 2008, driven by widespread discontent among the Sunni Arab minority and the civil war in neighboring Syria.

Bombings and shootings are a near-daily occurrence in the capital, often killing and wounding civilians but also targeting security forces members.

Attacks and clashes have killed more than 660 people nationwide since the beginning of the month, and over 1,650 since January 1, according to Agence France Presse figures based on security and medical sources.