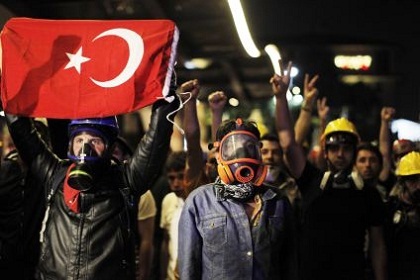 Turkish riot police fired tear gas Tuesday at protesters massed outside a hospital after the death of a teenage boy wounded during anti-government protests last year and left comatose.

About 1,000 people staged a rally outside an Istanbul hospital in solidarity with 15-year-old Berkin Elvan, who was walking to buy bread when he was struck in the head by a tear gas canister during the unrest in the city in June.

The story of Elvan -- who spent 269 days in a coma -- gripped the nation and became a symbol of the heavy-handed tactics used by police to reign in the biggest demonstrations against Prime Minister Recep Tayyip Erdogan since he came to power in 2003.

On Tuesday, police used tear gas and water cannon after several dozen protesters at the Istanbul hospital hurled stones at a police bus and stole helmets and shields, an Agence France Presse photographer said, adding that one demonstrator was injured.

In another protest in the capital Ankara, police fired tear gas and water cannon at around 1,000 students gathered outside the Middle East Technical University, an opposition stronghold, and blocked a major highway.

Silent vigils were held in the cities of Izmir, Antalya and Eskisehir, where a large number of students boycotted their classes, according to local media.

In Istanbul's Okmeydani neighborhood, where Elvan lived, shopkeepers shut their stores in a show of solidarity.

The boy's mother Gulsum Elvan, speaking to reporters outside the Istanbul hospital, challenged Erdogan who had praised police "heroism" during the protests.

"It's not God who took my son away but prime minister Erdogan," she said through tears.

President Abdullah Gul, who had called Elvan's family while he was in a coma, expressed his sadness at the boy's death.

He urged everyone "to do everything to prevent this from happening again."

Human Rights Watch charged that police violence against demonstrators was an "endemic problem" in Turkey.

"There is an urgent need to identify which officers used teargas launchers to determine who shot Berkin," Emma Sinclair-Webb, Turkey researcher at Human Rights Watch, said in a statement.

"Berkin and his family deserve justice."

The June protests began as a small environmental movement to save an Istanbul park and snowballed into a nationwide outcry against Erdogan, who critics say has become increasingly authoritarian.

Elvan's death brought the toll from the unrest to at least eight including a policeman.

An estimated 2.5 million people took to the streets across Turkey over three weeks in June to demand Erdogan's resignation. More than 8,000 people were injured, according to medics.

Erdogan is now battling even bigger problems since a corruption scandal erupted in December implicating his inner circle and their families.

The country has seen a number of protests against controversial measures taken by Erdogan in response to the scandal including laws tightening state control over the Internet and the judiciary.