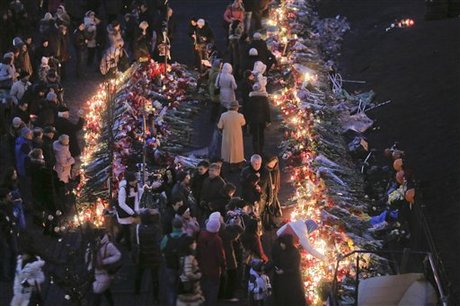 "Putin = Dracula," "Putin = Hitler," "Putin, get out": posters and caricatures attacking the Russian leader have multiplied over the last couple of weeks on the Maidan, Kiev's protest tent-city.

As Russian forces have taken control of Ukraine's Crimean peninsula, protesters have reveled in making comparisons between Russian President Vladimir Putin and Adolf Hitler, combining their names in slogans that conclude that "Putler has gone mad."

These personal attacks, unseen until a few weeks ago among the protesters who have camped out since November demanding a new government, contrast with Putin's record popularity in Russia.

Before the ousting of the pro-Moscow government in Kiev last month, anti-Russian sentiment was remarkably absent from posters and banners.

"This changed the day we saw our president Viktor Yanukovych pop up in Rostov (in Russia) and ask for Moscow's help," said Volodymyr Karasik, a member of one of the Maidan's self-defense units.

Yanukovych fled Ukraine after he was ousted on February 22 and after days of uncertainty as to his whereabouts, reappeared in the south Russian city of Rostov-on-Don where he insisted he had not been overthrown.

"I'm from Kharkiv (in eastern Ukraine), I speak Russian and I have nothing against Russia as a nation. But that day, I understood Yanukovych was in fact a servant of Putin. That's unacceptable," said Karasik.

"Thank goodness we didn't open fire, or it would be World War III," said another protester, who asked not to be named as he works in the civil service.

The anti-Putin slogans range from the humorous to the vulgar, often with wordplays that are impossible to translate.

One jokingly warned U.S. President Barack Obama of his Russian counterpart's expansionist tendencies: "Obama, tomorrow Putin will be in Alaska!"

Elsewhere however, the tone was more serious.

On Instytutska street, where the majority of people were killed in clashes that left 100 dead over three months, a large sheet of metal propped up against the rough barricades defied Russia's strongman.

"Putin, you can lie to your people, insult my dignity, break my arms and even kill me. But you will never take away my freedom!"

Beyond the barricades of Kiev, the Maidan protesters are also making sure their message is heard abroad, carrying signs in English at rallies in front of the French, German and British embassies, as well as the EU representation earlier this week.

Slogans written on portraits of Putin called for economic sanctions against Russia, "the only way to stop him". Others were more direct and colorful: "Keep calm and fuck you Putin."

"They're all being duped by these propaganda lies," Gamay reacted.

"They want to make us their slaves, because Russia would be weak without our industrial and intellectual potential."