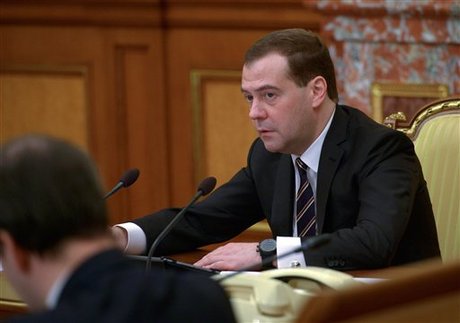 Prime Minister Dmitry Medvedev visited Crimea on Monday, the first Russian leader to travel to the Black Sea region after Moscow seized it from Ukraine.

"Am in Simferopol. Today the government will discuss the development of Crimea," Medvedev wrote on Twitter.

Medvedev arrived in Crimea's main city Simferopol at the head of a major delegation of ministers and deputy prime ministers and was set to chair a meeting on the social and economic development of Crimea after its incorporation into Russia, Russian news agencies reported.

The Russian government said in a statement that Medvedev would discuss "current questions of social economic development of the Republic of Crimea and the city of Sevastopol".

He was accompanied by officials including powerful First Deputy Prime Minister Igor Shuvalov.

It is the highest-level visit yet by a Russian government official to Crimea after its annexation by Moscow.