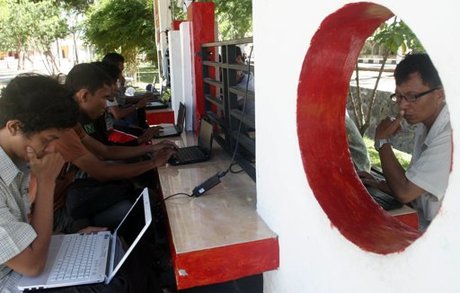 Venture capitalists from Silicon Valley to New York all have the same question about Indonesia's come-from-nowhere tech frenzy: Are the young entrepreneurs that have piqued their interest smart bets or just surfing a hype that will soon burn out.

A few years ago, Internet connections were so slow in Indonesia that trying to download a clip off YouTube could take 20 minutes on a good day.

Now the Muslim majority nation of 240 million people — despite the tangled balls of telephone wire that dangle precariously over dusty, potholed roads — boasts the world's second largest number of Facebook users and is third for Twitter.

It's also seen an explosion of Web startups, with 200 popping up so far this year alone, said Natali Ardianto, owner of StartupLokal, which offers a place for founders, developers and potential investors to meet.

At the moment most of Indonesia's tech newbies aren't distinguished by their creativity. Many are clones of well-established foreign companies like Craig's List or TripAdvisor, or Groupon, offering discount coupons and deals.

But with a little nurturing and eventually funds to advertise and strategize, venture capitalists and small-scale investors hope one day to make some money and — maybe, along the way — help discover Indonesia's answer to Mark Zuckerberg.

"It's still early and there isn't much structure on the ground," said Faysal Sohail, managing director of CMEA Capital, one of the leading venture capital firms in Silicon Valley, after a whirlwind trip to Indonesia.

"But from a growth point of view, India and China has been predominantly done at this stage, there are a lot of investors there already," he said. "So now the question is, what are the markets beyond that."

That's partially why I came," he said, "to look for some new, world class entrepreneurs."

He's ready to invest some money, he said, but personally, not yet through a fund.

Most of the founders of new startups are young, recent college grads working from their living rooms or garages with two to six people, using cash scraped together from their parents, friends and professors.

In the majority of cases, the operations are considered too small to be able to handle infusions of more than $500,000 to $2 million. And business plans are still pretty rudimentary.

But there are several promising young entrepreneurs out there, Sohail and others said.

Twenty-six-year-old Eduardus Christmas, who hit the scene two years ago, is considered one of the early birds.

"I saw a need and was trying to fill it," Christmas said, lighting up cigarette at an outdoor cafe. "I was also genuinely interested in digital publishing."

"A lot of the newcomers in digital media seem to be attracted by the hype, they see how fast things are growing and want to jump in," he said. "You've seen that especially in the last year, year and a half."

These days, Christmas is thinking more seriously about ways to make money — one of the biggest challenges he and others face, because with only 3 percent of the population holding a credit card, there is almost no e-commerce.

There's also little in the way of adverting dollars.

Pulling an iPad from his bag, Christmas shows one of his latest projects, interactive books, starting with Indonesian classical pianist Ananda Sukarlan.

His newest company, Enervolution, is a registered Apple developer, and will allow users to browse content for free and then pay for and download Sukarlan's music with the help of an iTunes app.

He's hoping, in this way, to tap into a premium market.

At this early stage, there have only been a few big success stories, most notably the forum and classifieds portal Kaskus, which got a $100 million commitment from a local investor, and the location-based social network Koprol that Yahoo! recently acquired.

But plenty of others are gaining traction, thanks in large part to high penetration of BlackBerry, iPhone and other smartphones — some of them knockoffs — which have allowed Indonesians, despite poor infrastructure, to shoot straight into cyber space.

The idea — as in the early days of Silicon Valley — is to build-first, find ways to capitalize later.

It may seem risky, but even Google CEO Eric Schmidt thinks the opportunities are huge.

Joining him at a conference celebrating local entrepreneurship on the resort island of Bali late last month were a small group of investors and venture capitalists interested in encouraging tech-hungry youths and also seeing what opportunities might exist for them.

They looked at an online soccer simulation game, Football Saga, where members train their players, join teams and compete with other clubs set up by their friends. They also were interested in a payment gateway for music, e-commerce and other digital content and a Web-based karaoke site.

"You have 180 million cell phones, but did you know that you have only about 18 percent Internet penetration?" said Schmidt. "You're going to have an Internet explosion."