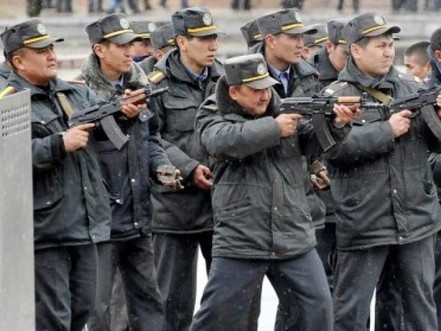 Kyrgyzstan police detained scores of people in the capital Bishkek Thursday as the opposition gathered for a rally to demand reforms.

About a thousand people gathered in a Bishkek park for the protest organised by the National Opposition Movement, which formed out of several smaller parties earlier this year.

Police said they detained more than 150 of the protesters, while the opposition said some 500 people were detained.

A spokeswoman for Bishkek police, Anna Zhukova, said that more than 150 people who arrived for the demonstration in the capital Bishkek from elsewhere in the country have been detained and that police intended to release them following questioning and a check of their identities.

The opposition is demanding the cutting of presidential powers in the politically volatile Central Asian country, which saw two regimes overthrown in uprisings in 2005 and 2010, a year that also saw inter-ethnic bloodletting in the south that claimed hundreds of lives.

Last year bloody clashes concerning the fate of a Canadian gold mine in the country led to a brief state of emergency in parts of the mountainous state.