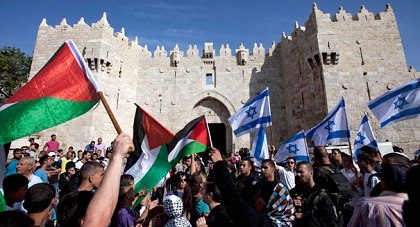 Israeli and Palestinian negotiators met on Sunday in a fresh bid to save their teetering U.S.-brokered peace talks, a Palestinian official said.

There was no immediate word from the Israeli side, which was to observe the seven-day Jewish holidays of Passover from sunset on Monday.

The teams last met last Thursday in a session presided over by U.S. envoy Martin Indyk, who has since returned to Washington for consultations.

But following that meeting the peace process suffered a new blow when Israel said it would freeze the transfer of duties it collects on the Palestinians' behalf, in retaliation for their diplomatic offensive against Israel at the United Nations.

The monthly 80 million euros ($111 million) in taxes collected by Israel represents about two-thirds of the income received by the Palestinian Authority.

Israel was also suspending its participation with the Palestinians in developing a gas field off the Gaza Strip and putting a cap on Palestinian deposits in its banks, the Israeli official said.

Israel's Foreign Minister Avigdor Lieberman, in a meeting with ambassadors posted in Tel Aviv on Sunday, blamed the Palestinians for the rapid deterioration in the peace process.

"We were very close to an agreement with the Palestinians, a complex transaction which was being examined by the (Israeli) cabinet, but at the last moment the Palestinians broke their promises and submitted applications" to join international treaties, he charged.

A senior Palestinian official, Nabil Shaath, said the Palestinians still had "several options" and would not be deterred.

"Israel's sanctions will not deter Palestinian steps to join international treaties and organisations," he said, quoted by the Palestinian news agency WAFA.

The Israeli reprisals have sparked concern in Washington.

"We've seen these press reports, but we have not seen an official public announcement by the Government of Israel," State Department spokeswoman Jen Psaki briefed reporters on Friday.

"That said, we would regard such a development as unfortunate.

The talks hit an impasse two weeks ago when Israel refused to release as agreed a group of Palestinian prisoners and the Palestinians retaliated by seeking accession to several international treaties.