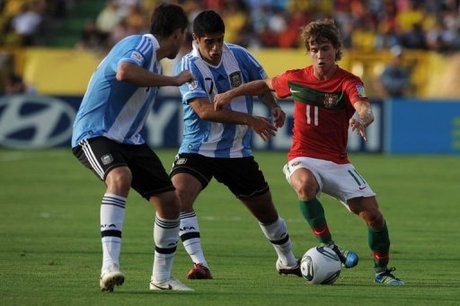 Portugal advanced to the semi-finals of the U20 World Cup with a dramatic 5-4 penalty shootout victory over favorites Argentina as Mexico also booked their berth by beating hosts Colombia 3-1.

In a tie with few real chances on goal and a scoreline 0-0 after 120 minutes in Cartagena the Portuguese came back from a 3-1 penalty deficit to send Argentina crashing out of the competition they have won six times.

Argentina coach Walter Perazzo, whose side had not conceded a goal so far in the competition, admitted he was stunned by the defeat.

"The outcome was unexpected, it surprised me," said Perazzo. "Luck favored them in the penalty shootout."

Portugal counterpart Ilidio Vale said his side proved they were ready for a third title after 1989 and 1991.

"Argentina were candidates to win the Cup," said Vale.

"It was a competitive game between two good teams. Portugal were worthy winners, we were better organized during the game and the result speaks for itself."

Argentina goalie Andrada did well to keep out a Caetano effort after 21 minutes which proved to be the only real shot at goal in regular time.

Playmaker Lamela had Luque had shown good teamwork but without being able to make the difference, as strikers Caetano and Oliveira were the best of the Portuguese players.

Portugal looked on their way home after Andrada saved from Danilo Pereira and Roderick Miranda to put Argentina 3-1 in the shootout, but Leandro Pirez, Emanual Ruiz and Nicolas Tagliafio all missed to send the Europeans through.

In Bogota, an Erick Torres penalty (38) and a double from Edson Rivera (69, 88) saw Mexico through against Colombia, although the hosts got one back from Duvan Zapata (60).

Colombia coach Eduardo Lara said: "I'm saddened by this result. I take total responsibility for the errors on the pitch but the boys did everything they could."

Portugal next meet either France or Nigeria who play their quarter-final tie in Cali later Sunday, as Mexico next meet Brazil or Spain in next Wednesday's semi-finals.