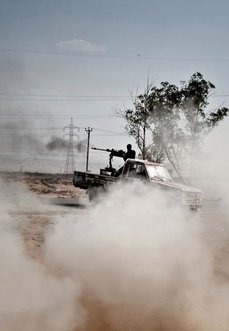 Libya's rebels on Monday denied reports they were talking with the tottering regime of Moammar Gadhafi, as fighting raged in both east and west and Washington said the strongman's "days are numbered."

The United Nations also denied that its special envoy on Libya Abdul Ilah al-Khatib was involved with talks in Tunisia between representatives of Gadhafi and the rebels after Khatib had indicated he would be joining such talks.

"The United Nations has no concrete information on any talks which may be held in Tunisia between the National Transition Council and authorities from Tripoli and the special envoy is not participating in such talks," U.N. deputy spokesman Farhan Haq said.

Khatib, who has spent months shuttling between Tripoli and Benghazi trying to kick-start ceasefire talks, had said that negotiations on Libya's future would take place in a Tunis hotel.

Reports of rebel-regime negotiations in Tunisia had sparked a swift denial from Benghazi, the insurgency's stronghold in eastern Libya.

"There are no negotiations or talks between the Gadhafi regime and the NTC in Tunisia or anywhere else," said NTC vice-chairman Abdul Hafiz Ghoga.

Earlier, sources close to Tunisian security services said representatives of the two warring sides had met in Djerba, near the Tunisian-Libyan border.

A South African jet and two Qatari military helicopters were on the tarmac at the airport in Djerba, a south Tunisian island near the border with Libya, an airport source told Agence France Presse.

It was not immediately clear whether it was a defection.

Dozens of high-ranking officials have turned their back on Gadhafi, including former interior and justice ministers and his ambassador to the Cairo-based Arab league, since the revolt erupted exactly six months ago.

In the west, forces loyal to Gadhafi on Monday shelled central Zawiyah hours after rebels claimed they had seized control of most of the strategic port, an AFP reporter saw.

Rebels said earlier they had seized "most" of the port 40 kilometers west of Tripoli, the last barrier to their thrust towards the capital.

"Basically most of the town is under the control of rebel fighters," the insurgents' field commander Abdul Hamid Ismail told AFP.

Earlier, the rebels claimed they had also wrested control of the town of Sorman, 60 kilometers west of Tripoli and Garyan, 50 kilometers to the south.

"It’s becoming increasingly clear that Gadhafi’s days are numbered, that his isolation grows more extreme as each day passes," he said.

Libyan government spokesman Moussa Ibrahim has, however, said that the regime's armed forces can retake towns and districts where the rebels have made advances in recent days.

"Our mujahedeen forces are capable of exterminating these gangs," he told a news conference in Tripoli.

On the eastern front, rebels battled loyalist forces around oil installations in the key eastern oil town of Brega, an AFP reporter saw.

Rows of seaside apartment blocks that once housed oil workers in eastern Brega were under total rebel control.

The claimed rebel advances, which would put opposition forces in sight of Tripoli in the west, came as Gadhafi railed against the rebels and NATO, amid rumors he was preparing to flee.

Overnight, Gadhafi predicted a swift end for "the rats" and the "colonizer" -- the rebels and NATO -- in an audio message on Libyan television, extracts of which were published by official news agency JANA.

"The end of the colonizer is close and the end of the rats is close. They (the rebels) flee from one house to another before the masses who are chasing them," Gadhafi declared.

"The colonizer and its agents can now only resort to lies and psychological warfare after all the wars with all the weapons have failed," Gadhafi said amid rumors on Twitter and other media about his imminent flight into exile.

The veteran leader called on his supporters to "prepare for the battle to liberate" rebel-held towns.

Ibrahim acknowledged "problems" in Sorman, 60 kilometers west of Tripoli, but "hundreds of volunteers" backed by the army were "handling the case," he said.

He admitted that the rebels had entered Garyan in the Nefusa mountains "in order to spread terror ... but there is no need for concern" since government troops would retake the town "in the next few hours."

Abdul Salam Othman, spokesman for the rebels' western military council, said on Monday that both Garyan and Sorman were in rebel hands, as was the 15-kilometer stretch of road linking Sorman to Zawiyah.

He said the advances meant that Tripoli's supply lines from Tunisia are severed.

Meanwhile, the Dutch government has given 100 million euros ($144.5 million) in frozen Libyan assets to the World Health Organization to distribute medicine to the Libyan people, a foreign ministry spokesman said on Monday.