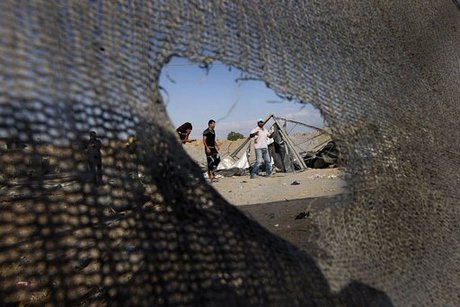 One Palestinian was killed and seven wounded in at least four overnight Israeli air strikes across the Gaza Strip, Palestinian medics said on Tuesday.

The Israeli military said its aircraft had targeted four areas in the Gaza Strip in response to the firing of a Grad rocket from the Palestinian territory into southern Israel.

Adham Abu Selmiya, spokesman for the Hamas-run emergency services in the Gaza Strip, said the strikes had killed one Palestinian and wounded seven.

"We learned of the martyrdom of the youth Musa Shtawe, 29, who died of his injuries after a strike east of Gaza City," he said.

"The outcome of the Israeli aggression during the past 24 hours is now one martyr and seven injured."

The Israeli military did not specify which sites it had targeted, but Palestinian sources said they counted five air strikes across Gaza.

Three of the raids hit targets east of Gaza City, including the Zeitun neighborhood, they said.

Further south, two more raids were carried out east of Khan Yunis and on a tunnel under the border with Egypt near Rafah, they said.

The military said the strikes were "in response to the firing of a rocket from the Gaza Strip at the city of Beersheva.

"In a separate incident, IDF soldiers identified a squad of terrorists planning to fire rockets at Israel. IAF (Israel Air Force) aircraft thwarted the attempt, confirming a hit," it said.

The rocket that hit near Beersheva did not cause any damage or injuries, the military said. Israeli public radio said a second rocket had been fired at Beersheva, but it was not immediately clear where it landed.

Since last month there has been an increase in the number of rockets fired from Gaza, which are usually followed by retaliatory air raids.

The incidents have interrupted several months of calm following a flare-up in April, when an anti-tank missile hit an Israeli school bus, killing a teenager.

Israel responded to that attack with a series of air strikes that killed at least 19 Palestinians in the deadliest violence since Israel's devastating 22-day assault on Gaza over New Year 2009.