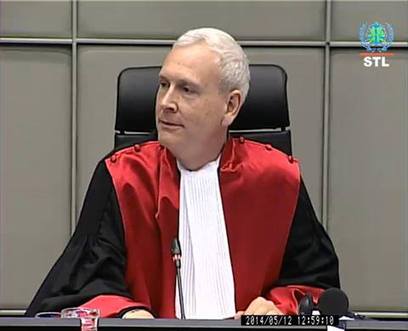 The Trial Chamber of the U.N.-backed Special Tribunal for Lebanon on Monday ordered the resumption of trial of the five accused in the Ayyash et al. case on June 18, 2014.

“The Prosecutor's opening statement of the case against (the accused) Mr. (Hassan) Merhi will be scheduled for June 18,” the STL added.

“Counsel for Mr. Merhi may then, if they choose, make their own opening statement,” it said.

The Trial Chamber will then sit on “a reduced basis of several days a week” until the judicial recess in July, so as to allow more days for hearing “and thus more free time for counsel to prepare,” the court added.

The chamber will re-assess this sitting schedule in July.

“Any party wishing to file an appeal against this decision can do so within seven days,” the STL said.

During Monday's session, the Prosecution provided an overview of how they will continue the presentation of the first chapter of their case.

Meanwhile, co-counsel for Merhi stated that the Merhi case is “large and complex” and that this is “exacerbated by the in absentia circumstances of the case.”

The Prosecution said that in discussions with the Merhi Defense, “it was agreed that trial may be resumed with the first part of their case.”

The Merhi Defense co-counsel added that their explosive expert will only start his work with the Merhi team on May 19.

The co-counsel said that some Prosecution witnesses are “controversial” that it's crucial to have explosive experts in their cross examination.

In response to a motion by the Defense counsel of the accused Assad Sabra on the cooperation of Lebanese authorities, the trial chamber issued an “interim decision.”

“The interim decision did not dismiss the Sabra motion nor grant it fully. It instructed Lebanon to respond to the the Sabra defense motion,” the STL said.

The Trial Chamber stated that “if Lebanon does not have in its possession the sought after material asked for by the STL, it should communicate this so that the STL can look for documents elsewhere.”

On February 26, the Trial Chamber had “ordered the adjournment of the trial sessions until at least early to mid-May to allow Defense counsel for Hassan Habib Merhi adequate time to prepare for trial and to conduct their own investigations.”

Earlier in February, the STL approved a request from the Prosecution to join the case against Merhi to the case against Hizbullah members Salim Ayyash, Mustafa Badreddine, Assad Sabra and Hussein Oneissi, whose in absentia trial had started on January 16.

During a February 12 session, the defense team objected against several logistical procedures adopted by the Trial Chamber, refusing the fragmentation of trials.

“We oppose the fragmentation of trials and conduct ethics oblige us to acquaint ourselves with all the aspects of the case,” Merhi' defense lawyer Mohamed Aouini said.

“We must be able to cross-examine the witnesses and we can't just attend for the sake of attendance,” he stressed.

Aouini then requested to have “a certain reasonable period to look into all the files of the case.”

During that session, STL Prosecutor Norman Farrell said that Merhi's defense team may need six to seven months to prepare their files on the case

Merhi's defense, however, said that they could not determine the time they needed to prepare their case.

Merhi is charged with a number of crimes including "the crime of conspiracy aimed at committing a terrorist act."

He is alleged to have acted in a conspiracy with Hizbullah members Badreddine, Ayyash, Oneissi and Sabra in relation to the attack on February 14, 2005.

Merhi is alleged to have coordinated the preparation of the purported claim of responsibility as part of the preparations for and in furtherance of the attack.

The STL has described Merhi as “a supporter of Hizbullah” who was born on December 12, 1965 in Beirut. It said he has resided in Burj al-Barajneh.

Hizbullah chief Sayyed Hassan Nasrallah has rejected the STL, describing it as an American-Israeli conspiracy against his party. He has vowed never to cooperate with the tribunal, saying that the suspects will never be found.