Higher Prices during the Big Trend for Back-to-School in U.S. 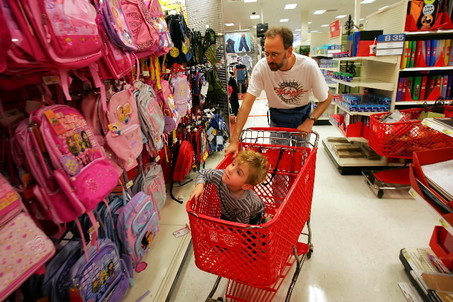 Stores are trying everything they can think of to disguise the fact that you're going to pay more for clothes this fall.

Some are using less fabric and calling it the new look. Others are adding cheap stitching and trumpeting it as a redesign. And the buttons on that blouse? Chances are you're not going to think it's worth paying several dollars more for the shirt just to have them.

Retailers are raising prices on merchandise an average of 10 percent across-the-board this fall in an effort to offset their rising costs for materials and labor. But merchants are worried that cash-strapped customers who are weighed down by economic woes will balk at price hikes. So, retailers are trying to raise prices without tipping off unsuspecting customers.

Retailers have long tried to mask price hikes — for instance, jacking them up more than needed so that they can offer a "sale" on the higher price. But the new strategies come as merchants' production and labor costs are expected to rise 10 percent to 20 percent in the second half of the year after having remained low during most of the past two decades. Costs can quickly add up: Raw materials account for 25 percent to 50 percent of the cost of producing a garment, while labor ranges from 20 percent to 40 percent, analysts estimate.

Stores already have passed along their rising costs to customers by raising prices on select items. The core Consumer Price Index, which includes spending on everything except food and energy, rose 0.2 percent in July, the Labor Department said Thursday. But now that production costs are going up even higher, merchants are increasing prices on a broader range of merchandise. Because of their concern that shoppers will retreat, though, retailers are treading the line between style, quality and price.

Some merchants are making inexpensive tweaks __ additional stitching, fake button holes, fancy tags __ to justify price increases. Those embellishments can add pennies to $1 to the cost of a garment, but retailers can charge $10 more for them, said Marshal Cohen, chief industry analyst with market research firm The NPD Group.

"We're not seeing deflation or inflation; we're seeing con-flation," he said. "Stores are making consumers believe they're getting more for their money."

After the price of the fabric for its girl's corduroy pants almost doubled, catalog retailer Lands' End, based in Dodgeville, Wis., raised the price of the pants by $7 to $34.50. The company, a unit of Sears Holdings Corp., also added buttons and stitching on the pockets to dress them up.

"Consumers are going to notice the price differences," said Michele Casper, a Lands' End spokeswoman. "But they are also going to get a lot of added benefits so they know they're not getting short-changed."

Others are taking away things, but marketing it to customers as the latest trend.

Spencer Elmen, owner of Cupid's Lingerie, which operates five stores in Arkansas, said he is seeing more items in his store that are even skimpier than usual, from underwear to mini dresses. He says that's because designers are finding clever ways to conceal the fact that they're clothes have less fabric.

Elmen said $39.99 teddies, which are $5 more than that they were last year, feature a studded heart that gathers up the material to disguise the fact that less fabric is being used. He also noted that the corsets with fishnet patterns are priced about 5 percent more at about $49, even though they also have less material.

"They're just being more creative with less fabric," Elmen said.

Teen retailer Abercrombie & Fitch is advertising "Redesigned 2012" jean collection in its stores and on its website, touting that the jeans are "softer, with the perfect amount of stretch." They're also mostly priced between $78 and $88, about $10 more than last year, according to Jennifer Black, who heads up research firm Jennifer Black & Associates.

Sozzi, the Wall Street Strategies retail analyst, examined the jeans and believes they are "thinner" and of "cheaper quality." That extra stretch, he says, simply could mean the retailer is saving costs by using less denim.

Eric Cerny, an Abercrombie & Fitch spokesman, declined to comment. But Cerny reiterated what executives told investors in recent months: the bulk of increases on items will start to happen in September and the chain will not sacrifice quality to achieve cost reductions.

Bill Melnick, director of strategic planning at SAI Marketing, which studies consumer behavior at major consumer brands, said most shoppers may not notice retailers' tactics to disguise prices. But he says shoppers won't buy if they can't afford it.

"Shoppers are being pragmatic," he says, nothing that they think "'If it fits into my budget, then it's a sale.'"

Rhonda Sayen, a Stephens City, Va., resident, said she checked out prices on new fall items and noticed jeans that were about $40 a year ago are now closer to $60. She also said she's spotted lower quality T-shirts at some of the stores.

"I know prices have changed," said Sayen, who added that she and her husband are sticking to a $400 budget for clothing and supplies for her four children ages 3 to 18. "You ain't fooling me."