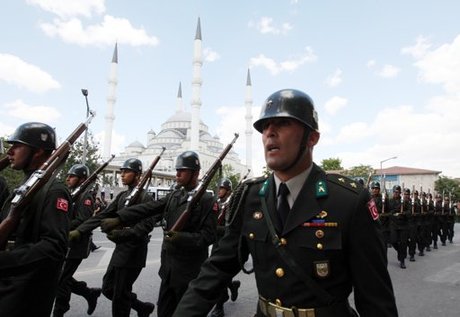 Turkey resumed its bombing of positions held by the Kurdistan Workers Party (PKK) in the Iraq mountains after a break of more than a year following an attack on Wednesday in southeast Turkey in which nine members of the Turkish security forces were killed.

"Eighty five targets were hit accurately and effectively in the morning and then in the evening," the army chief of staff said in a communique on its website.

The targets were in the zones of Hakurk, Avasin-Basyan and Zap, in northern Iraq, where the PKK has rear bases which it uses to attack Turkey, it added.

"The damage caused by the raids is in the process of being evaluated after reconnaissance flights over the area," it added.

The army also released footage of the raids showing explosions at "rebel hideouts" and PKK stores of foodstuffs and materiel.

Meanwhile the interior ministry announced that four Kurdish rebels had been killed in fighting in the past 48 hours in Hakkari and Siirt, two provinces in the Kurdish-majority southeast Anatolia, where the PKK began its armed struggle in 1984.

Since July, attacks blamed by the Turkish authorities on the PKK have killed around 40 soldiers and police, prompting Ankara to take a harder line in the long-running conflict which has claimed 45,000 lives.

Turkey on Thursday announced it was adopting new "tougher" measures against the outlawed group, to include sending special police and professional army units to the combat zones along the border with Iraq.

Until now the army has operated almost alone, but from now on, intelligence agents and the civilian authorities will coordinate in the fight against the PKK.

Some military analysts doubt whether air strikes will be enough to root out the PKK from the Iraqi mountains and are advocating a land offensive.

Since the early 1990s, the Turkish army has carried out several land forays into northern Iraq to chase rebels. The last such offensive, which lasted eight days, was back in 2008.

The United States, Turkey's ally within the North Atlantic Treaty Organization, and which regards the PKK as a terrorist organization, generally shares its intelligence on the PKK in Iraq with Ankara.

The Turkish military has said its operations both within Turkey and in parts of Iraq used as a safe haven by the PKK "will continue until it is eradicated."

According to Ankara, there are some 2,000 rebels operating from Iraq, from where they can filter back into Turkey to launch attacks.