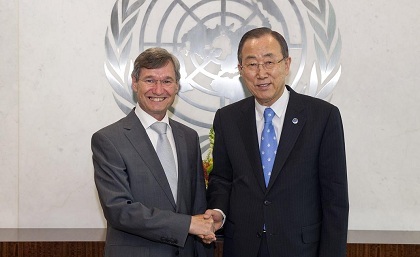 U.N. Secretary-General Ban Ki-moon has “highlighted the importance of the work” of the U.N.-backed Special Tribunal for Lebanon “in tackling impunity for the crimes within its jurisdiction.”

Ban voiced his remarks during a meeting with Head of STL Defense Office Francois Roux at the headquarters of the United Nations in New York on May 27, the STL announced on Friday.

The secretary-general noted “the vital role of the Defense Office in ensuring that the proceedings before the Special Tribunal for Lebanon are fair and credible.”

He also “highlighted the importance” of STL's work in “tackling impunity for the crimes within its jurisdiction,” expressing hope that the proceedings would move “smoothly and expeditiously.”

The STL Trial Chamber has issued an oral ruling setting a June 18 date for the resumption of the in absentia trial in the case of the 2005 assassination of former premier Rafik Hariri. The trial had kicked off on January 16, 2014 in The Hague.

The court has accused Hizbullah members Salim Ayyash, Mustafa Badreddine, Assad Sabra, Hussein Oneissi and Hassan Merhi of being involved in the murder.

Damn, and we thought the cost of this assassination was just the Mitsubishi truck and 500 kg of mix...

...Stolen truck, no cost there.