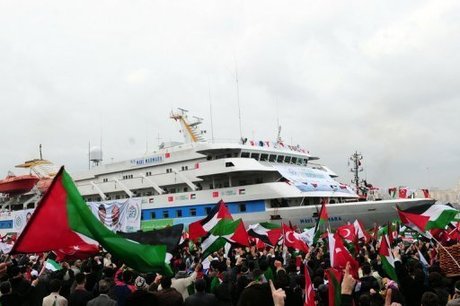 Turkish Foreign Minister Ahmet Davutoglu warned Saturday that relations with Israel will further deteriorate without an apology over a deadly 2010 flotilla raid.

"There can be no normalization with Israel if Turkey's demands are not met," the Anatolia news agency quoted him as saying during a visit to South Africa.

Diplomatic ties between Israel and Turkey have been in crisis since Israeli commandos staged a deadly raid on the international aid flotilla trying to reach Gaza in defiance of an Israeli naval blockade on the Palestinian territory.

Nine Turkish nationals were killed in the operation, and Turkey says its once-close relationship with the Jewish state can only be restored with an apology for the deaths. Until now, Israel has refused.

A United Nations report into the flotilla affair, whose publication has been postponed at least twice this year to allow time for the two sides to reconcile their differences, was due to be released soon.

Davutoglu said that relations between his country and Israel would only worsen if an apology was not forthcoming following the report's release.

"Relations will not remain as they are now, they will deteriorate even more... The current situation cannot be sustained," he said.

According to Turkish diplomats, Ankara could further downgrade its representation in Tel Aviv. It maintained a charge d'affaires there after recalling its ambassador following the May 2010 raid.