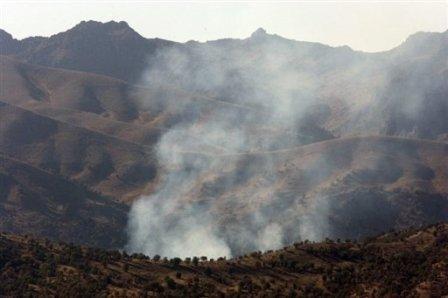 Turkish jets carried out air strikes against a Kurdish separatist group's bases in north Iraq for a fifth day on Sunday, and began shelling for the first time, a rebel spokesman told AFP.

He said the strikes were continuing as of 12:30 pm (0930 GMT), and that the Turkish army had begun artillery bombardments against Khowakirk, Zakarus and Ifsahim earlier Sunday morning.

Denis said Turkey had also carried out air strikes against Jabal Mattine and Haftan on Saturday night. He did not specify if there had been any casualties in the bombing or shelling.

The spokesman also said he believes the Turkish army is preparing for an incursion into north Iraq.

"The Turkish army is making preparations on the border with the Kurdistan region of Iraq to enter in a battle with members of the Kurdistan Workers' Party," he said.

The Turkish military launched a first wave of bomb attacks on Wednesday against PKK targets in Iraq after a deadly attack by the rebel group against a military unit in Cukurca town in southeast Turkey that killed nine security personnel.

It was the first time in more than a year that the Turkish military has carried out air strikes on PKK bases in northern Iraq.

Since the early 1990s, the Turkish army has carried out several land forays into northern Iraq to chase rebels. The last such offensive, which lasted eight days, was back in 2008.

The PKK, listed as a terrorist group by Ankara and much of the international community, took up arms in the Kurdish-majority southeast in 1984, sparking a conflict that has claimed about 45,000 lives.