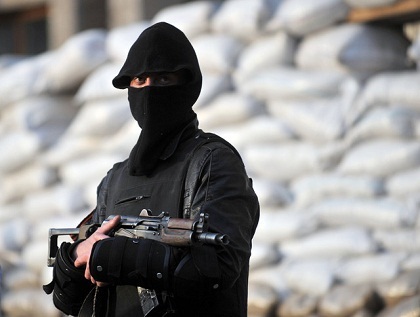 Ukrainian authorities said Thursday they had closed three checkpoints on the border with Russia after nightly assaults by separatists.

The move came as the government vowed to beef up its security presence to counter pro-Russian rebels, amid reports of continued fighting in the country's east.

The three checkpoints, all in the volatile Lugansk region, were targeted in attacks by pro-Russian rebels overnight Wednesday to Thursday, the border guards said in a statement.

"After an exchange of fire, the threat to the lives of people crossing the border prompted the evacuation of civilians and border guards at the checkpoints," the border guards said in a statement.

The statement added that the three checkpoints -- at Chervonopartyzansk, Dolzhansky and Chervona Mogyla -- had been temporarily closed, and that the Russian side had been notified.

Ukraine's border guards have been especially targeted in recent rebel attacks, and had to abandon their regional headquarters in the city of Lugansk after an insurgent onslaught on Monday.

"The night passed relatively quietly. According to residents in the village of Shyroke, gunshots could be heard," the government of Donetsk, the region's main city, said in a statement.

Donetsk, home to about one million people, has been reduced to a state of near-anarchy following heavy fighting between Ukrainian forces and pro-Russian rebels around its international airport.

The fighting has left about 40 dead, mainly separatists, according to reports, and the airport will remain closed at least until the end of the month, as the security of flights cannot be guaranteed.

The streets of Donetsk are nearly deserted and under the control of insurgents, who man numerous checkpoints in the area.

Ukrainian forces, who launched an "anti-terrorist operation" nearly two months ago, intensified their activities on Tuesday, concentrating their efforts on the rebel stronghold of Slavyansk, more than 100 kilometers (60 miles) north of Donetsk.

Two Ukrainian soldiers have lost their lives in this week's fighting, while numerous insurgents have been killed, according to Kiev.

The fighting has also damaged the water supply to five cities in the combat zone, including Slavyansk.

On Wednesday night, Ukrainian forces said they had destroyed a rebel ammunition depot in the area.

The interior ministry said on Thursday it would send a third National Guard battalion to the east.

The National Guardsmen, volunteers supporting the regular army, are expected to arrive within 10 days.

In a separate report, Ukraine's defense ministry said T-64 tanks had been deployed near Slavyansk to guard the positions of forces engaged in military operations there.

"Terrorists have been damaging the tanks in every possible way," the ministry said. "They are repaired on the spot, and put right back into action."

Later on Thursday, Russian Prime Minister Dmitry Medvedev said that thousands of Ukrainians are flooding across the border into Russia to escape the armed conflict.

Speaking a day after Ukraine denied a mass exodus, Medvedev said several thousand Ukrainians had applied for refugee status -- even though Ukrainian nationals have the automatic right to stay three months in Russia.

"A stream of people is heading into the (southern Russian) Rostov region and partly into other regions. It's mainly children and the people accompanying them. Their numbers are in the thousands," Medvedev said at a televised government meeting.

"Before it was only a handful (asking for refugee status), now the number applying has grown to 4,000 people, that's an unprecedented situation," he said.

"People are very scared and frightened."

Ukraine said in a statement on Wednesday that just over 11,400 people crossed into Russia from Ukraine on June 3, a couple of hundred more than on the previous day, and that almost the same numbers came across from Russia.

"On the state border with Russia, not one Ukrainian citizen has expressed a desire to receive refugee status in Russia," the migration service said.

The Rostov region's governor Vasily Golubev declared a state of emergency in 15 cities close to the Ukrainian border on Wednesday, citing an influx of Ukrainians from the conflict zone.

"The emergency regime will allow us to more efficiently organize additional temporary accommodation for refugees from southeastern Ukraine," Golubev wrote on Twitter.

Russian children's rights commissioner Pavel Astakhov wrote on Instagram on Thursday that more than 8,300 Ukrainians had entered the Rostov region in the past 24 hours.

It is clear that the leadership of the separatists - both political representatives and military leadership - are from outside of Donbass. Why doesn't EU send in irregular military to combat this? Also, most of advanced equipment is from Russian military - why not send in equivalent equipment? Oh -- because this might start WWIII? Well, I think it has already started.