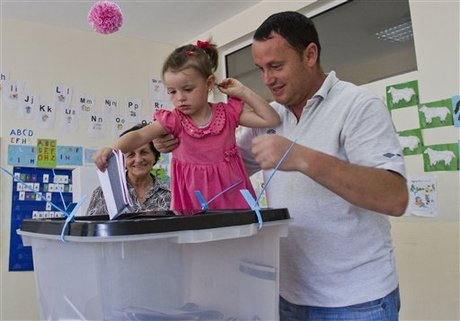 Kosovo's snap parliamentary election passed off peacefully on Sunday with Serbs in its restive northern region taking part for the first time in a possible boost for the country's EU hopes.

Prime Minister Hashim Thaci, an ex-guerilla chief who has dominated politics since the country declared independence in 2008, is seeking re-election but faces a potential backlash in Europe's poorest country over high unemployment and rampant corruption.

A few polling stations remained open past the 1700 GMT closing time to allow late-comers to cast their ballot, but turnout was low at 42 percent.

Preliminary results were not expected until Monday, but the country's political class will be mostly pleased that polling in the northern Serb region passed off smoothly.

It was the first time voters in the region had taken part in a general election, following a historic EU-brokered accord between Kosovo and Serbia last year in which Belgrade agreed to recognize Pristina's authority over the entire Kosovan territory.

Although Serbia still rejects Kosovo's full independence, it had encouraged Kosovan Serbs to take part in the vote in order to strengthen its own EU entry talks.

Many of Kosovo's Serbs, who number around 120,000 in the country of 1.8 million, have reacted angrily to the agreement. Gangs of armed men trashed polling stations in the northern enclave during local elections last November. This time, there was no violence, although there appeared to be reluctance to take part in the polls.

The 46-year-old Thaci is seeking his third term as prime minister but has faced mounting criticism from voters angry about a sluggish economy and high unemployment.

"Thaci's victory has never been more uncertain," said political analyst Behlul Beqaj, although he added that a low turnout would work in Thaci's favor.

"Our state is a new European country with huge developing opportunities that we will use in the interest of the people," Thaci said after casting his ballot in downtown Pristina, accompanied by his wife.

Thaci's popularity soared when the former army commander declared the break from Serbia six years ago, but analysts say the sheen has started to fade.

"He has been weakened politically by his failure to address the main challenges in our society," said political analyst Nexhmedin Spahiu.

Landlocked Kosovo has one of the lowest living standards in Europe, with average monthly wages of 350 euros ($480), nearly half the population living in poverty and some 12 percent in extreme poverty.

Unemployment is stuck at 35 percent, rising to 55 percent among the young, according to the Kosovo Statistics Bureau.

At one Pristina polling station, a dozen people queued up to vote as soon as booths opened.

"We had high expectations from independence, but little came true," a 49-year-old driver told Agence France Presse after casting his ballot.

Thaci's Democratic Party of Kosovo (PDK) had just 32 MPs in the outgoing parliament and had been ruling with support from a small Albanian party and parties of minority groups including Serbs, Bosniaks and Turks.

Serbs in the north seemed reluctant to take part in the polls, despite the urging from Belgrade.

"Participation... and support for Serb representatives at this election is the civic and patriotic duty of every Serb citizen in Kosovo," the Serbian government said in a statement on Thursday.

But in the flashpoint northern town of Mitrovica as in other Serb-dominated towns in the north, few people showed up to cast their ballots, according to an AFP journalist at the scene.

Ever since Belgrade struck its deal with Pristina and began the process of handing control of this enclave over to Kosovo, locals have lost faith that Serbia will look after their interests.

Dragan Maksimovic, a 38-year old lawyer, decided not to vote.

"I do not like the way officials in Belgrade are treating us, trying to convince us that they know what is best for us," he told AFP.

"It means nothing to have Serb MPs in the Kosovo parliament as they only look to Belgrade and don't care about our problems."