Turkish PM Reacts Angrily to Removal of Flag by Protester 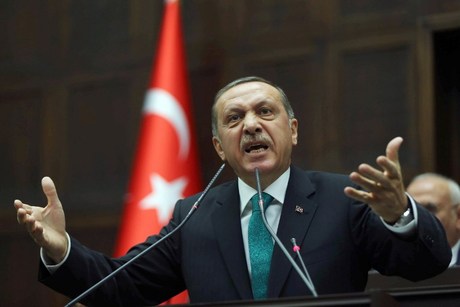 Turkish Prime Minister Recep Tayyip Erdogan reacted with fury on Monday to the removal of a Turkish flag from a military base by a Kurdish protester, during a weekend of clashes that left two dead.

Protesters in the Kurdish-dominated southeast, angry over what they see as an overbearing and ever-growing military presence, clashed with Turkish soldiers on Saturday, leading to the deaths of two Kurdish demonstrators.

The killings sparked further clashes on Sunday, during which a masked protester climbed a pole at an air base in the southeastern city of Diyarbakir and took down a Turkish flag.

"We don't care if he is a child," Erdogan said, referring to the protester. "Even if a child dares to take down our sacred flag both him and those who send him there will pay a price."

The prime minister added that he had ordered his interior minister to investigate the incident in Diyarbakir.

The event dominated the airwaves in Turkey on Monday, drawing condemnation from allies and opponents alike.

"We can never accept such an action," Kemal Kilicdaroglu, the leader of the country's main opposition Republican People's Party (CHP), said earlier on Monday.

Tensions have been steadily rising in the southeast in recent weeks over the construction of new army posts in Kurdish-majority areas, seen as a threat to a peace process launched in 2012 between Turkey and the outlawed Kurdistan Workers' Party (PKK).

The Kurdish rebels declared a ceasefire in March last year following secret talks with the country's spy agency. But the process came to a halt after the PKK announced in September they were suspending their retreat from Turkish soil, accusing the government of failing to deliver on promised reforms.

The PKK, which is blacklisted as a terrorist organization by Turkey and much of the international community, launched an insurgency seeking self-rule in the southeast in 1984. The conflict that followed has claimed about 45,000 lives.

The PKK has since limited its demands to greater autonomy for Turkey's Kurdish population, which numbers between 14 and 20 million according to different estimates.

Erdogan, who is widely expected to run in the country's first-ever direct election for president in August, will need Kurdish votes if he is to succeed.