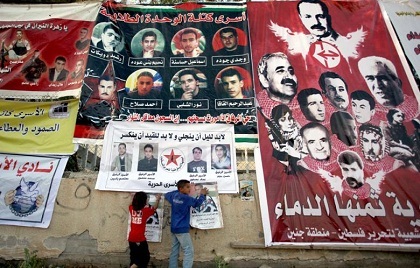 A senior Palestinian official has called for international action against Israel over the detention without charge of more than 100 Palestinians who have been on a long-term hunger strike.

"I am writing on behalf of the Palestine Liberation Organization and President Mahmud Abbas to request your immediate intervention on behalf of the approximately 130 Palestinian detainees and prisoners currently on hunger strike in Israeli prisons," Saeb Erakat said in a letter obtained by AFP Wednesday.

"We call on you to call on Israel to annul the policy of administrative detention and to condition deepening your bilateral ties with Israel pending Israel's fulfillment of all its obligations," he wrote in English.

Administrative detention is a procedure dating back to the pre-1948 British mandate under which military courts can hold suspects without charge for periods of up to six months, which can be renewed indefinitely.

It was also sent to U.N. Security Council members, but not to non-permanent member Australia, which recently said it would no longer refer to annexed east Jerusalem as "occupied," infuriating the Palestinian leadership which wants it as capital of their future state.

Israel Prisons Service told AFP there were currently 250 inmates refusing food, 90 of them for over six weeks of whom 75 had been hospitalized.

Some 5,000 Palestinians are being held in Israeli jails, with nearly 200 in administrative detention.

U.N. chief Ban Ki-moon has urged Israel to either charge or release the striking prisoners without delay.

Meanwhile, Israel pushed forward with plans for a bill to enable doctors to feed hunger strikers against their will.

Parliament on Monday approved the bill in its first reading, ahead of a series of debates in a committee and two further plenum votes before it passes into law.

But the draft legislation, composed by the internal security ministry, has raised objections not only among left-wing, liberal and Arab lawmakers, but also from the Israel Medical Association which has urged Justice Minister Tzipi Livni to block the bill.

In a letter to Livni, the IMA warned the move would be "in total contradiction to internationally-accepted medical ethics" and Israel's medical ethical code.

Force feeding poses a "danger" to the health of those on hunger strike "and is against the non-maleficence principle," said the letter which was signed by IMA head Doctor Leonid Edelman and Professor Avionam Reches, chairman of its ethics bureau.

"The proposed law is wrong ethically and professionally, it won't only damage the patients and their medical condition, but also Israel's world standing," they wrote.

"We can't accept a law that places doctors in a battle they should have no part of, in total contrast to their professional and ethical duties."