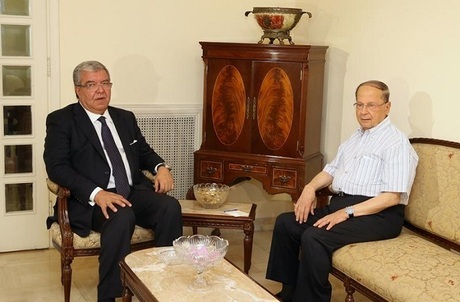 Saudi Arabia claims that “it is at an equal distance from everyone,” al-Mashnouq told al-Akhbar newspaper on Tuesday.

“But in reality it does not back a confrontational candidate,” he said.

The minister hinted that Aoun could not be a compromise candidate as long as he does not receive Riyadh's backing.

In a series of other remarks to several local dailies, al-Mashnouq said some politicians believe that the election of a new president is a local issue while others claim it is a regional issue.

“I back the second opinion,” he said.

Al-Mashnouq discussed with the FPM chief on Monday ways to agree on a mechanism that allows the government to function in the absence of a president.

He also said that their talks focused on the electoral draft-law.

Aoun denied that the so-called Orthodox Gathering proposal is under discussion, al-Mashnouq added.

“Dialogue is ongoing between us. It has so far achieved cabinet stability and facilitated the success of the security plan,” the minister, who is an al-Mustaqbal official, told reporters in Rabieh on Monday after meeting with Aoun.

“I didn't convey any message to Aoun,” Mashnouq said.

Unbelievable. The founder of Al Qaeda and modern-day terrorism is dictating to the Lebanese who they can elect as President. And yet the Al Qaeda sympathizers still insist that the kingdom of terrorism doesn't interfere in Lebanese affairs.

did you ever complain when syrian choose the lebanese president? LOL so your patriotism is not very credible!

What is unbelievable ya Karim is that we could have achieved a made in Lebanon president within the constitutional deadlines instead,due to aoun's obstruction and procrastination the deadline is long gone and this has now resulted in outside interference. Aoun has proved that he once again has put his own interests before the country's.

are you from the Inquisition period? seems you are as intolerant as the christians from that middle age period! LOL

let me tell you thathe Sisters from the Malta order are much more tolerant than you, so please get lost....

hey aussie... your beloved FPM MP kanaan said a few days ago: we must respect taef... already forgot that? LOL

waahahaha! the saudis and kanaan call to stick to taef... but FPM is right but not saudis! what a sick mind is yours! poor creature, you need real psychiatric treatment!

yeah sure sissy boy... stick to the insults and stupid posts it is all you are good at...
feel free now to show us your level of insults... i will not enter your game

you just made my point... you showed once again your level of thinking by insulting... you are just a joke.

I guess you know who bought his nice suit. Is it considered patriotic for a Lebanese politician to serve Saudi masters? I don't understand the rules very well.

Aoun has the same chances as Geagea to be elected president, and those chances are equal to 0.

Aoun again is his own worst enemy. Had he sought election to the Presidency by majority vote rather than by consensus, he might have had a chance. But when he demands unanimity among all parties to his choice, then he gives everyone a veto, including the Saudis. Such a stupid man, his ambition is only topped by his stupidity as he tries to realize his ambition. And as Aoun struggles with his ambition vs. his stupidity, the nation and its government is placed in limbo on the shelf. No one person should make a whole country wait while he solves his psychosis.

What? The Saudis are responsible for making Aoun senile?