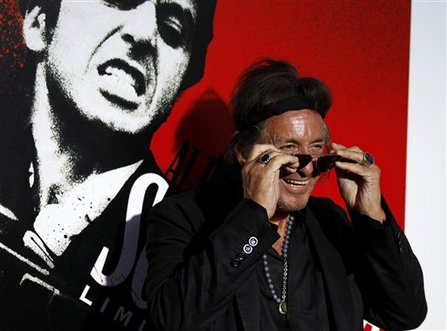 Al Pacino says he got burned while making "Scarface."

Literally, he grabbed the hot barrel of a gun that had just shot 30 rounds during one of Tony Montana's violent scenes.

"My hand stuck to that sucker," the 71-year-old actor recalled. He couldn't work for two weeks.

Part of the charm of the film, Pacino said, is that it wasn't initially a hit.

"It's one of my favorites because of its whole evolution," he said. "It (was) sort of eviscerated after it opened by the press. ... Nobody was fond of it, except it had good audience participation."

He said "it's almost a miracle" audiences continue to discover and appreciate the film.

He wanted to make it after being inspired by Paul Muni's performance in the 1932 original. Sidney Lumet suggested he make the main character Cuban instead of Italian.

Pacino's "Scarface" is set in 1980s Miami, and Tony Montana is an ambitious immigrant who runs a growing drug empire until he eventually collapses under greed and addiction. Pacino's performance as the gun-wielding, coke-snorting Montana is among his most memorable.

He said that during the nine months he was shooting the film, his character practically inhabited him. When a friend's yappy little dog lunged at him, Pacino said he cocked back his fist instinctively, as if threatening a punch.

"So I love Tony Montana, man, because I couldn't do that!" Pacino said Tuesday.

Its timeless themes of greed, desire and ambition would make it controversial even if it were just released today, Pacino said.

Screenwriter Oliver Stone and director Brian De Palma were both "trying to talk about the avarice of the '80s," Pacino said. "At that time, there was this whole thing about greed, which was Wall Street and everything, and I think that's part of it. A great character, too, Tony Montana — a person who dares to do anything, who flies like a Phoenix, like Icarus, close to the sun."

The Blu-Ray will be released Sept. 6. "Scarface" is also set to play at 475 theaters nationwide on Aug. 31 for a special one-night engagement.