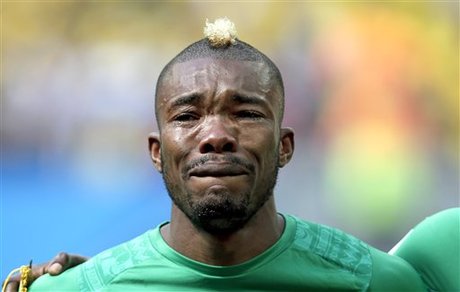 Ivory Coast international Serey Die showed true dedication to his country by playing on despite the fact his father passed away just two hours before kick-off.

The brave midfielder broke down as the Ivory Coast national anthem played out ahead of their Group C game against Colombia on Thursday night.

Many had initially assumed Die's tears were because the occasion had got the better of him, however, according to reports the 29-year-old's father had passed away shortly before the match in Brasilia.

Sporting a blond mohawk, Die tried to keep a stiff upper lip in an attempt to sing the words of his nations anthem but just couldn't control his tears.

Defender Serge Aurier and former Tottenham man Didier Zokora were quick to console Die before the match got underway.

Newcastle star Cheick Tiote also put an arm around Die, who only made

Unfortunately the match didn't go according to plan for the Ivory Coast as Didier Drogba lost the game 2-1.

James Rodriguez and Juan Fernando Quintero scored for Colomboa while former Arsenal man Gervinho netted a consolation for the Elephants.

Having gained his composure to take to the field, Die was later involved in a bizarre off the ball incident.

After Colombia were awarded a free-kick by referee Howard Webb following Die's tussle with Juan Camilo Zuniga, the Ivory Coast man swiftly fell to the floor with his hands over his face before letting out a roar of frustration.