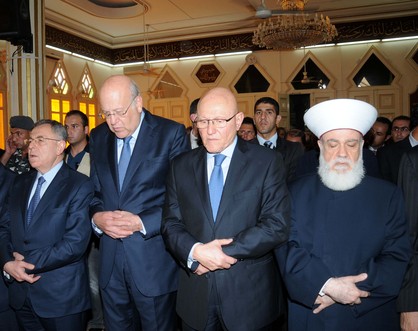 Prime Minister Tammam Salam led the funeral which left al-Solh's house in the Beirut neighborhood of Ain al-Tineh at 4:00 pm and marched towards the Ouzai area.

Al-Solh was later laid to rest near the Imam al-Ouzai shrine.

Earlier in the day, Lebanon announced three days of mourning over the passing of the former Premier.

Salam ordered in a released statement flags to be flown at half mast at all state institutions, and for the national television channel and radio station to stop playing any music in these three days of mourning.

Al-Solh has promoted and strengthened values of dialogue and sectarian coexistence as the only means to protect Lebanon, Salam described the late PM's legacy in a released statement.

With his passing, Beirut has lost a politician who was in continuous communication with the city's residents and an MP who represented it greatly in seven parliamentary terms, the Premier added.

"With his passing, (Lebanon has lost) a statesman who played a crucial political role and undertook important national missions during difficult times in the country's history. He was very keen on performing his duty to the fullest without neglecting national values, on top of them the unity of the Lebanese entity,” Salam continued.

Hariri, meanwhile, said al-Solh dedicated his life to serve the people of Beirut.

"He served Lebanon with wisdom and a national sense that is a characteristic of the Solh family,” Hariri said in a released statement.

Al-Sold was chosen to form and head Lebanon's cabinet in 1974 by late President Suleiman Franjieh. But his term in office was cut short after the eruption of the Lebanese Civil War.

In 1992, he was also chosen as Premier by former President Elias Hrawi, but his second term in office only lasted for five months.

Al-Solh served as a Beirut MP in seven parliamentary terms, and was the Minister of Interior in his own cabinet in 1974.

Condolences will be received on Saturday at the former PM's house in Ain al-Tineh, and on Sunday and Monday from 11:00 am to 6:00 pm at the Rafik Hariri Hall in al-Amin mosque in downtown Beirut.

Too bad it was not you Ya qalil al adab

Why 3 days to mourn? then again its not like the govenrment has anything to worry about plus the guys mayhave a couple of BQ's to attend and the party at Rico's in the evening... cool this buds for you yeah...cool.

Aouni ya fart thrower? Too much Ghizbolah defender!