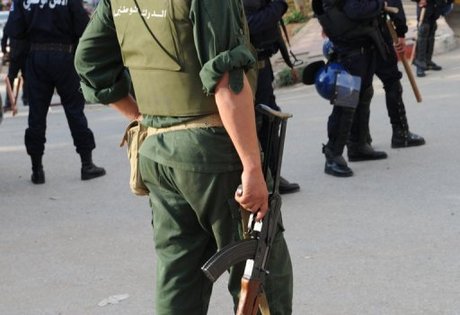 Eighteen people were killed and 26 wounded in a suicide bombing at the Cherchell military academy west of Algiers, the defense ministry said Saturday revising its own toll given hours earlier.

The ministry said 16 officers and two civilians were among the dead. Twenty wounded had been discharged but six people were still in hospital, one in critical condition.

The wounded were evacuated to hospitals in the nearby towns of Sidi Ghiles and Tipaza, as well as to the army's central Ain-Naadja hospital in Algiers.

The ministry had earlier revised a toll given Friday by hospital officials of 18 dead and dozens of wounded, saying 11 people died.

No reason was given for the latest revision of the toll.

Saturday's figures were the first to be published by an official source, a day after the twin suicide attack about 100 kilometers west of the Algerian capital around 10 minutes after the breaking of the Ramadan fast.

The ministry branded the attack "appalling and terrorist" and attributed it to "criminal gangs" targeting objects that would be of media interest.

According to el-Watan newspaper, the suicide bombers tried to cause as many casualties as possible by targeting the officers' mess just as all the soldiers were assembled to break the fast.

The bombers, one on a motorcycle, set off explosions a few seconds apart in front of the entrance to the officers' mess hall, the paper said.

Ramadan is generally considered a good time for holy war, or jihad, by Islamist groups. Since the fast started in early August, there have been many attacks east of Algiers, especially in Kabylie, targeting the army and police.

Authorities generally remain tight-lipped about such incidents, which have not ended despite a policy of national reconciliation adopted in the early 2000s by President Abdelaziz Bouteflika.

Most attacks are attributed to al-Qaida's North African offshoot, al-Qaida in the Islamic Maghreb.

Under Algeria's policy of national reconciliation many Islamist fighters have been offered pardons in exchange for laying down their arms.

Late Tuesday two policemen and a soldier were killed in two separate attacks in the Bordj Bou Arreridj region, 220 kilometres southeast of the capital, and in Boumerdes, 50 kilometers east of Algiers.

The scene of Friday's attack, the Cherchell Academy, was set up by France during World War II after the Allied landings in North Africa on November 8, 1942. It remained an officers' college after Algerian independence in 1962.