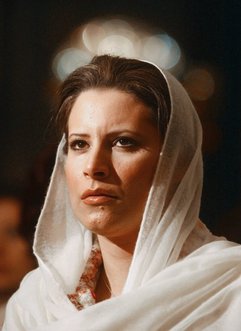 Moammar Gadhafi's daughter Aisha, who fled to Algeria with other family members on Monday, has given birth to a baby daughter, an Algerian government official announced Tuesday.

"Aisha gave birth very early this morning. She had a little girl. Mother and daughter are doing fine," said the official.

Algerian authorities earlier said that Aisha, her brothers Hannibal and Mohammed, and her mother Safiya, were allowed into the country on purely "humanitarian grounds."

"The wife of Moammar Gadhafi, Safiya, his daughter Aisha, and sons Hannibal and Mohammed, accompanied by their children, entered Algeria at 8:45 am (0745 GMT) through the Algeria-Libyan border," the foreign ministry said in a statement carried by the state APS news agency, giving no information on the whereabouts of Gadhafi himself.

Libya's rebels are seeking the handover of Gadhafi's wife and three children and have criticized Algeria, which has not recognized the rebel National Transition Council, for taking in the family.

So far Algeria has not recognized the rebels' administration and has adopted a stance of strict neutrality on the conflict in its neighbor, leading some among the rebels to accuse it of supporting the Gadhafi regime.