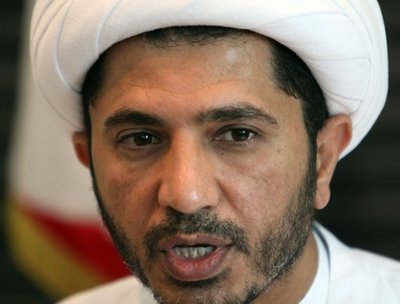 Bahrain's main Shiite opposition party, al-Wefaq, on Tuesday demanded the closure of military courts set up during a protest crackdown and condemned an attack on the home of its leader.

In a statement received by Agence France Presse, Wefaq demanded the "closure of military tribunals and the repeal of all their verdicts, the release of all political prisoners and the start of real political reforms" in the Gulf kingdom.

Wefaq, which took part in a national dialogue in July before pulling out, reiterated its demand for an elected government and elected assembly with full powers.

The party also condemned an attack on Tuesday by "security forces" on the residence of its leader, cleric Sheikh Ali Salman, in a Shiite part of the capital Manama, damaging his car and surveillance cameras.

Two days earlier, the same residence was shot at with rubber bullets and tear gas, it added, while also lamenting a rise in night attacks that have injured people in several parts of Bahrain.

Tensions persist in the Sunni-ruled Shiite-majority nation more than five months after security forces crushed Shiite-led democracy protests inspired by uprisings that toppled the autocratic presidents of Tunisia and Egypt.

Meanwhile, Bahraini authorities said that King Hamad pardoned poet Ayat al-Qarmezi, along with "all those who abused him and other senior Bahraini officials during unrest earlier this year."

The pardon was issued in a speech by the king marking the end of Ramadan, the holy Muslim month of fasting, the Information Affairs Authority said in a statement.