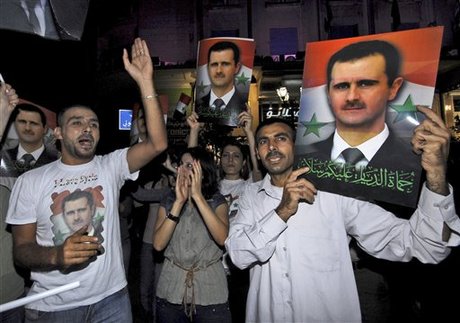 The United States said Tuesday that "pro-government thugs" in Syria made a "feeble attempt" to draw world attention away from protests when they filmed the U.S. ambassador observing a sit-in.

A video posted Monday by the U.S. blog The Cable shows Ambassador Robert Ford being harassed by a supporter of President Bashar al-Assad's regime who tried to wrap him in a poster of the Syrian leader.

The event was broadcast on a Syrian television station owned by Mohamed Hamsho, a businessman who is the brother-in-law of the president's brother, Maher al-Assad, The Cable said.

State Department spokeswoman Victoria Nuland said the incident happened last week when Ford and European ambassadors were invited by a group of lawyers to attend a sit-in at the Syrian Bar Association.

"He was not involved in any disruptive activity," Nuland told reporters.

"But some pro-government thugs came and tried to interrupt his bearing of witness and then put it on YouTube as a cynical effort to portray him as an agiteur when, in fact, they should have been paying attention to their own lawyers protesting peacefully at the bar association," she added.

When asked if the event indicated Ford was in any danger, Nuland replied: "the ambassador's guard force was able to handle the incident, and it ended peacefully, and he left the scene."

She added: "From that perspective, it was a feeble attempt to divert the world's attention from what's really going on in Syria with the Syrian people."