One Dead as Hundreds Flee False Tsunami Alert in Philippines 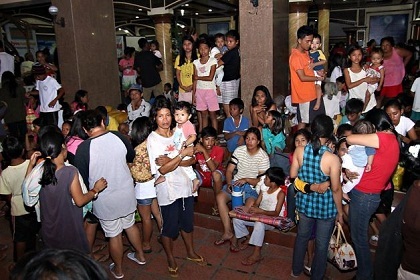 A false tsunami alarm left one person dead and prompted hundreds of others to flee their homes in the Philippines, where natural disasters are frequent, a civil defense official said Wednesday.

The cause of the sudden panic that hit Candelaria 88 kilometers (55 miles) south of Manila and other impoverished towns is still being investigated, said Henry Buzar, head of the area's disaster management council.

A 63-year-old woman who was fleeing on a motorized tricycle had a heart attack and died, Buzar said, citing a local hospital.

"We really don't know where the rumor came from. We suddenly received information that there were some people evacuating from the area" late Tuesday he told AFP.

"It was really chaotic. I told our staff to block the people and tell them there is no truth to these rumors but they told me they could not stop the rush of people," Buzar said.

Nearly a thousand people, many crammed into trucks and mini-buses, gathered at Candelaria's town hall for safety. But when no tsunami materialized, they went home after a few hours, he added.

Buzar said he was puzzled by the sudden evacuation as there had been no report of any earthquake that might cause a tsunami, and many of those who fled did not even live on the coast.

The darkness and heavy rains brought on by the passage of Typhoon Matmo and anonymous cellphone SMS messages may have helped trigger the confused exodus even though Matmo never hit land, disaster officials said.

At least 20 storms lash the country each year and earthquakes are a constant threat.

The most recent disaster was Typhoon Rammasun which slammed into the country last week, leaving 98 dead and five missing.