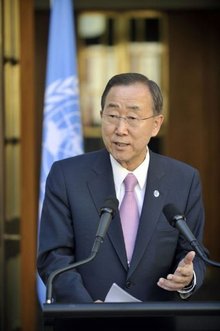 United Nations Secretary-General Ban Ki-Moon Saturday said he sincerely hoped that Israel and Turkey could improve ties, saying both states were critical to improving stability in the Middle East.

"I sincerely hope that Israel and Turkey will improve their relationship," Ban told reporters in Canberra after Turkey expelled Israel's ambassador to Ankara and suspended all military ties with its one-time ally.

The U.N. leader said he had been trying to help the countries improve their relationship since May 31, 2010 when Israeli troops boarded a Gaza aid flotilla, leading to the deaths of nine people including eight Turks.

The diplomatic fallout comes in the wake of a U.N. probe that slammed the "excessive" force used in a raid.

Ban said he could not comment on the report by the panel he established to investigate the incident.

"I am not in a position to say any specific comments on the substance of the findings," he said.

"My only wish is that they should try to improve their relationship and do whatever they can to implement the recommendations and findings of this panel's report."