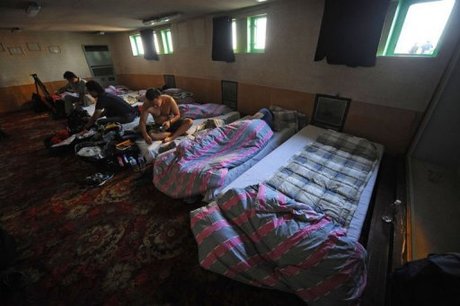 The United States sent a plane loaded with a small but symbolic shipment of emergency aid that was due to arrive in flood-stricken North Korea on Saturday, in the latest sign of a thaw in relations between the countries.

A cargo plane departed Friday from the U.S. packed with $900,000 worth of food, medical aid, soap, blankets and cooking kits, according to the North Carolina-based aid group Samaritan's Purse.

The shipment is to "let the North Koreans know that we are their friends," Franklin Graham, president of the relief agency, said from an airfield in Charlotte, North Carolina, in a video clip posted on the group's website. The clip showed tractors towing boxes to the plane, and the Boeing-747 taking off in a cloud of dust.

Samaritan's Purse said it has pledged $1.2 million in addition to the $900,000 that the U.S. government has allocated for aid to North Korea through U.S.-based charities.

Ken Isaacs, a Samaritan's Purse vice president, said the group has worked with the U.S. government and several other Christian organizations to send the aid as they try to "continue gaining humanitarian access into North Korea."

The help comes after U.S. and North Korean officials met in New York in late July for talks seen as a sign of a thaw in relations between the wartime foes.

Officials say they discussed ways to restart nuclear disarmament negotiations that have been stalled for more than two years. Washington says Pyongyang must prove its commitment to dismantling its nuclear arms programs before the talks on providing aid in exchange for disarmament can resume.

North Korea and the U.S. signed a truce in 1953 to bring the Korean War to a close, but have not signed a peace treaty and do not have diplomatic relations. Pyongyang cites the U.S. military presence in South Korea as a main reason for the need to build atomic weapons.

North Korea has been reaching out recently for help in the wake of autumn flooding last year, an unusually harsh winter and more heavy rain this spring and summer.

Heavy rain and tropical storms have pounded North Korea in the past few months, displacing nearly 30,000 people and killing dozens, according to the International Federation of the Red Cross.

The World Food Program said earlier this year that an estimated 6 million of North Korea's population of 24 million would go hungry without help from outside donors due to the impact on the harvest.

However, there are persistent concerns among some governments that aid to the North is routinely diverted to the powerful military.

Washington has not responded with food aid, but pledged to provide emergency help for the flooding.

The State Department said that providing humanitarian assistance is separate from political and security concerns. "This emergency relief demonstrates our continuing concern for the well-being of the North Korean people," it said in a statement.

Even a small amount carries weight, one analyst said.

"However small they may be, aid offers and other developments enhance the mood for greater political cooperation," said Kim Young-yoon, a senior researcher at the state-funded Korea Institute for National Unification in Seoul.