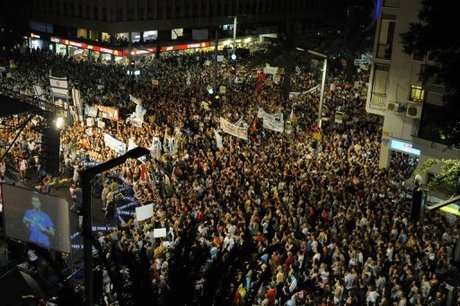 An estimated 400,000 Israelis poured into streets across the Jewish state on Saturday to protest the high cost of living, after organizers called for a "million-man march" to revitalize their movement.

The estimated figures were record-breaking, exceeding even the 300,000 people who took part in similar demonstration on August 6, and lending new life to the six-week old movement calling for sweeping economic reforms.

Israeli news channel 10 estimated that 400,000 people were demonstrating in cities and towns across the Jewish state, taking to the streets shortly after the end of the Jewish Sabbath.

Israeli police declined to give estimates for crowd figures, despite having given them during previous demonstrations.

"The land of milk and honey, but not for everybody," read one sign carried by a demonstrator in the coastal city. Other protesters waved Israeli flags and chanted against Israel's main supermarket companies, accusing them of unfair pricing.

"They told us that the movement was slowing down. Tonight we are showing that it's the opposite," he said.

"We are the new Israelis, determined to continue the fight for a fairer and better society, knowing that it will be long and difficult," he told the cheering protesters.

Organizers said they hoped to bring record-breaking numbers of people into the streets, exceeding even the unprecedented August 6 turnout.

Those protests marked something of a high point for the protest movement, which began in mid-May when frustrated young Israelis pitched tents on of Tel Aviv's trendiest neighborhoods to illustrate their inability to find affordable housing.

But in recent weeks, and particularly in the wake of a militant attack that killed nine Israelis, the movement appeared to have lost some momentum and commentators questioned whether it had peaked.

Ahead of the demonstrations, organizers said Saturday's turnout would show the movement remained strong, and would pile new pressure on Netanyahu's government, which has yet to take any concrete reform measures.

"We going to prove to those who have buried the movement that they were wrong and that the people are ready to go into the streets for social justice, affordable housing and the defense of public education and health services," protest leader Stav Shafir told Agence France Presse.

"We must maintain pressure on Benjamin Netanyahu, this is not the moment to cede ground, while he has not listened to us and done absolutely nothing," Shafir said.

Netanyahu's government has pledged to take the protesters' calls seriously and set up a committee head by respected economist Manuel Trachtenberg to examine their demands.

But the demonstrators say the measure is an attempt to stall, and point to Netanyahu's insistence that his government will not finance reforms by spending outside its current budget.

"We have formulated very specific demands in terms of necessary budget increases for housing, education and health, but no far not a single concrete measure has been taken," protest organizer Uri Metuki said.

You're the one with the brains here. I'm wtcahing for your posts.