Israel Seeks Calm with Turkey, But Not at Any Price 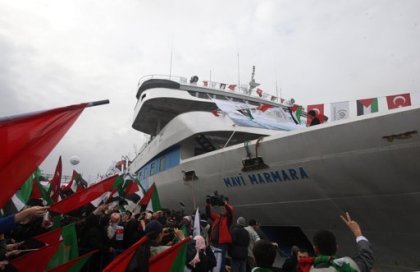 Israel wants to calm a fierce row that has erupted with one-time ally Turkey over a 2010 raid on an aid flotilla, but not at any cost, including issuing an apology, ministers and officials said Sunday.

In recent days, ties between the once-friendly nations appear to have plumbed new depths, with Ankara expelling Israel's ambassador and suspending military agreements in the wake of a U.N. report on the deadly 2010 raid.

Nine Turkish citizens were killed when Israeli commandos boarded the six-boat flotilla in a bid to stop it breaching a blockade on Gaza, and Israel has rejected Ankara's calls for an apology, compensation and an end to the blockade.

In Israel, ministers and officials were at pains to stress they had no desire to see relations with Turkey deteriorate.

"Israel never wanted its relations with Turkey to deteriorate and Israel still does not want the relations to deteriorate," Prime Minister Benjamin Netanyahu told his cabinet at a meeting on Sunday morning.

"Israel has no interest in an escalation with Turkey, on the contrary," Environment Minister Gilad Erdan, a Netanyahu confidant, added in remarks to public radio.

But the rhetoric coming from Ankara has grown increasingly strident, particularly in the light of leaked details of a long-awaited U.N. report on Israel's deadly raid on the Turkish-led aid flotilla.

The report, leaked Thursday, found Israel used excessive force in dealing with the activists on board the ships, including from the Turkish IHH organization, but endorsed Israel's naval blockade of the Gaza Strip.

Turkey rejected the report and said it would seek to lodge a case against Israel over the raid at the International Criminal Court at The Hague.

The report had been delayed multiple times in a bid to allow Ankara and Israel to determine a formula by which they could patch up their differences.

But Turkey's demands for an apology, compensation and the lifting of the blockade were repeatedly rejected by Israel.

On Sunday, Netanyahu once again stressed that the Jewish state would not apologize for its actions.

"We don't need to apologize for our soldiers defending themselves in the face of an attack by violent IHH activists," he said.

"The Turks are the origin of the deterioration in relations. Prime Minister Recep Tayyip Erdogan wants to show the countries in the region that he has managed to force Israel's hand, despite a U.N. report that favors us," he said.

Foreign ministry spokesman Yigal Palmor was at pains to stress that Turkey "is not an enemy country," but he said Ankara had actively impeded efforts to reach a compromise deal to repair ties between the former allies.

"Every time that discussions between the countries made progress in the last few months, Turkish leaders gave new excuses and ultimatums, which raises questions about their real goals," he told Agence France Presse.

A senior Israeli official, who spoke on condition of anonymity, accused Turkey of "a dangerous strategy that has resulted in greater isolation."

He warned against Turkey's reported plans to expand its naval presence in the eastern Mediterranean in response to what Ankara called Israeli "bullying."

"No one has given Turkey a mandate to ensure freedom of movement in the Mediterranean and we hope that NATO will make that clear to Ankara," he said.

The official accused Turkey of pursuing a "neo-Ottoman" strategy and said Ankara was seeking to inflame tensions with Israel because its policy towards Arab uprisings had backfired.

"Ankara's attempts at rapprochement with Syria and Libya have failed, ties with Egypt are tottering and tension is mounting with Iran," the official said.

"It's a shame that Turkey doesn't understand that Israel is a friendly country."

Naharnet, if I didn't know better, sometimes I'd think you're Israeli state news.