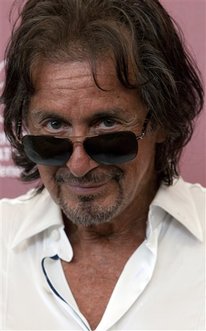 But his inspiration was simple: Jessica Chastain.

"There is Jessica Chastain, who I really believe is the reason I made the movie," Pacino said Sunday ahead of the film's long-awaited world premier in a side event at the Venice Film Festival.

"As soon as I met her, and saw her, I thought: This is the person to play 'Salome' and I must get her to play it before the world picks up on her — which it has done — and turns her into the next big star."

"Wilde Salome" has been so long in the making that the role was Chastain's first on film. She is, of course, by now a familiar face to moviegoers, having appeared in Terrence Malick's recent sprawling drama "The Tree of Life" and now in theaters with "The Debt" and "The Help."

Chastain said she and Pacino workshopped the play for over a year, in New York and Los Angeles, then rehearsed for a month on stage before filming on a soundstage, which made her very familiar with the character.

"I was always thinking of 'Salome,' and I was taking dance lessons, and everything I could do to try to approach it," she told a news conference in Venice.

The resulting film is a tour-de-force tribute to Oscar Wilde and "Salome," the 1891 play that he originally wrote in French to tell the story of Herod's obsession for his wife's daughter, culminating with Salome's vengeful demand for the head of John the Baptist on a silver platter.

Pacino's "Wilde Salome" defies easy definition, weaving together a documentary on Wilde's life, footage of a reading of the play in Los Angeles and a film version of the play.

"It's not a documentary. It's not a film. It's a much more ambitious and complicated gesture of cinema," Pacino said. "I wanted to make a kind of collage."

The director acknowledged that his ambition left him unsure how to pull the project together — and he let it percolate for long periods. "Wilde Salome" is in the tradition of his 1996 film "Looking for Richard," a documentary that Pacino said he directed in an attempt to make Shakespeare more accessible to Americans.

"I think there was this idea of creating something that would reveal things about myself, also. Because I interject myself as a kind of goofy guy, or someone who is trying to deal with the process ... the creative process," Pacino said.

Pacino, the actor, appears as "Herod" in both the play reading performances staged at the Wadsworth Theater, with the actors wearing modern clothes, and in the film version, which he said he intends to edit in its own right. He also pops up wearing a headdress and leading a camel through the desert in a "Salome" staging with a completely different cast.

Bono also agreed to allow the filmmakers to use for free his 12-year-old song "Salome," which plays as the credits roll.

The most personal revealing moments, however, were when Pacino was shown puzzling through the process. After watching the first cut, he sat there not saying anything for a few moments, then stood up and announced the crew had more work to do and walked out.

"At one point, I said I wasn't going to look at the movie for five month because I didn't know where to go with it," Pacino said. "Finally, after five months I took a look and I sort of knew where to go. ... Part of my luck was it worked."

But he did learn one lesson.

"I tell you, I recommend having a script, to myself, too," Pacino said. "I say it every day, 'I'm going to have a script the next time.' If there is one."

In a ceremony in Venice on Sunday evening, Pacino was awarded the Jaeger-Lecoultre Glory to the Filmmaker 2011 prize, in recognition of his contributions to contemporary cinema.