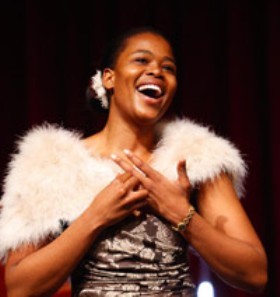 World champion soprano Pretty Yende never knew opera existed until a soaring score of an airline commercial came over the television in her South African black township home 10 years ago.

The flash of 19th-century French composer Leo Delibes' classic "Flower Duet" from his opera "Lakme" so moved the teenager growing up without librettas and arias that she asked a high school teacher the next day what the music was.

"He told me it's called opera," recalled Yende, now a resident at Milan's renowned La Scala a decade after telling her teacher: "I need to do that."

Experts say their rise is no sudden outpouring of new talent but rather that all-race freedom in 1994 leveled the playing field to allow those with remarkable gifts who were stifled under apartheid to enter the game.

"At the moment our best singers are black," said Virginia Davids, head of vocal studies at the South African College of Music based at the University of Cape Town.

"Formerly. people were not even allowed on the stage and that's why it looks as if there is a huge upsurge. But what it is is that suddenly things opened up and people started realizing they could make careers," said Davids.

"These singers have always been there but they have always been ignored. It's a pity because a lot of wonderful talent has gone missing in the process because of the situation that we had in this country," she added.

But local singers are forced to seek international stages, since Cape Town Opera is the only full time troupe in the country and probably the entire African continent with regular productions locally and tours abroad.

"It's sad...simply because there aren't enough opera companies in South Africa to sustain the employment. Really to make a living as an opera singer you need to go to Europe or to the States," said the opera's financial manager Elise Brunelle.

"There's so much history and there are so many people here whose lives and whose stories are perfectly suited to the operatic form," said Brunelle, adding that foreign audiences also respond well to the local stories.

"These are stories and people that can be understood in a worldwide context."

The students often come from impoverished backgrounds and, unlike their European counterparts, did not grow up with pianos and violins.

"The voice is the only instrument they have -- the only way of making music," said Davids who was one of South Africa's first non-white opera singers.

She laments the lack of local stages and the talent drain as gifted South Africans head overseas, but hails her opera students here.

"They are very focused and they know this is what I want to do. They are willing to put in the time," Davids said.

The aptitude for an art regarded as elitist "Old Europe" in South Africa -- where it is not unknown for an informal car guard to break into an aria -- also does not surprise soprano Yende. She says she is most at peace when singing and views the stage as home.

"So song has been part of us from a long long time."